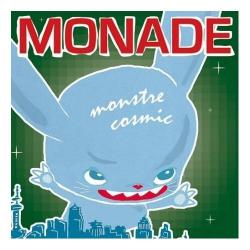 The past few Stereolab albums have felt a little overstuffed and underdone. Oft times, the band jumps tempos and rhythm tracks before they've reached their natural conclusion. It's as if the band is so full of these great ideas that they want to get all of them out at once, no matter how fragmented they end up sounding.

For this, the (for lack of a better word) blame appears to fall squarely on the shoulders of Tim Gane, the prinicipal musicsmilth in Stereolab. At least that's the impression I'm left with after listening to another fantastic solo effort by Stereolab's co-songwriter/lyricist Laetitia Sadier. Recording under the name Monade, Sadier has, over the last few years, released a series of albums that feel looser and seem to be freed of the retro constraints that Gane and his band place on themselves.

Monstre Cosmic, the most recent effort by Sadier and her now steady backing band, is her best work to date as a solo artist. It does show the influence of the same artists/producers that have marked much of Stereolab's latter day work (The Free Design, Krystof Komeda, Os Mutantes, Neu!, to name a few), but Monade doesn't let them govern how the song is written. Instead, Sadier uses them as starting points from which to draw her own brightly colored pictures with.

The best of these songs, though, are the ones that take advantage of Sadier's unbelievably pristine voice, one that is rivaled in clarity and an understanding of her voice's restraints by Astrud Gilberto. She still manages to surprise, though, as on "Etoile," when Sadier reaches into an upper register that she has never used before on record, adding a dreamy effect to an already dreamy mid-tempo song.

Sadier's compositional skills are in full bloom on Cosmic as well, using a mid-tempo, almost jazzy shuffle on many of the songs here. There are some intriguing shifts in the spirit of songs — "Entre Chein Le Loup" starts off a quiet, string driven mood piece but ends up sounding fitful, driven as it is by drums and clanking xylophone — but these transitions often feel, as in the case of the gorgeous, shape changing "Invitation," natural and inevitable.

It would be tempting, especially considering how solid all of her solo efforts have been, to petition on Sadier's behalf to stick to Monade, but as has been obvious since the band's early days, Stereolab needs the anchoring presence of her vocals and ideas. But with a solo album as good as this, us fans can't help but play a quick game of "What if?" before readying ourselves for whatever Sadier, Gane, and co. have to throw at us next.