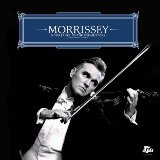 Ringleader of the Tormentors

TIG: We are lucky here in the Three Imaginary Girls Tower in downtown Seattle to be joined by the King of Gloom, the Troubadour of Dour, the Duke of Depression, none other than Steven Patrick Morrissey, better known to the world by merely his surname, Morrissey. He is one of the most influential musicians in the world today and his undeniable charisma has been drawing people to him for over twenty years now. He recently released his seventh solo album Ringleader of the Tormentors and we're eager to talk about his new disc and his illustrious career. So, without further ado, can we begin Morrissey?

TIG: You've always had the theme of loss in your albums, and Ringleader is no exception, but there seems to be a twinge of hope that opens the album in "I Will See You in Far Off Places." Have you found some newfound fountain of optimism that you'd been lacking?

Morrissey: Why don't you find out for yourself.

TIG: Ah, so it's a question of maturity. "I Will See You in Far Off Places" has almost a Middle Eastern tone to it, with your vocals as complex as anything that you've recorded. It seems like a natural combination: the sitar scale and your voice.

TIG: We're hardly making fun, it just seems like such a great combination.

Morrissey: Noise is the best revenge.

TIG: Yes indeed. "Far Off Places" seems like you thumbing your nose at America, right down to you warning "If your God bestows protection upon you/and if the U.S.A. doesn't bomb you/I believe I will see you somewhere safe." I take it you don't approve of the Bush Regime?

Morrissey: I'm not sorry. America is not the world.

TIG: There seems to be a lushness in these songs that started on your last album You Are the Quarry. "I'll Never Be Anybody's Hero Now" sounds like it would be a real showstopper live. The same can be said for "At Last I Am Born". The thunderous drums and strings that open that track are stunning coming from you, demanding attention, but then the song segues into what almost sounds like a flamenco number with Spanish guitar and finger snaps. Do you feel like you're reaching a new place creatively?

Morrissey: How can anybody possibly know how I feel? Is it really so strange?

TIG: Did your early success stunt your creative growth?

Morrissey: Money changes everything. Such a little thing makes such a big difference.

TIG: You seem to place some blame on your fans with a song like "You Have Killed Me". You suggest that no matter what people have tried, you're sense of self has been killed. You sing, Who am I that I/come to be here, suggesting a well of guilt for your success, but you end offering forgiveness to all. However, you wrap it all that in the song is rather infectious, one of the purest rock songs you've done since Your Arsenal. Do you feel that people resent your early and newfound success?

Morrissey: We hate it when our friends become successful. Do your best and don't worry or get off the stage.

TIG: So, you've learn to enjoy and accept success?

Morrissey: You just haven't earned it yet, baby.

TIG: And you have?

Morrissey: I can have both. These things take time.

TIG: Back to Ringleader of the Tormentors. "Dear God, Please Help Me" is a heart-felt plea to protect yourself from pain that comes from your love life. I mean, you actually sing, "There are explosive kegs between my legs." Do you really feel like your love life causes so much pain and misery?

TIG: So, a dirge like "Dear God" captures the mixed emotions you feel about love and lust?

Morrissey: There is a place in hell for me and my friends.

TIG: You must have some optimism. "In the Future When All Is Well" might be one of happiest songs you've penned. It even has a cheery melody with to go with downright giddy chorus of, "I thank you with all my heart." It seems like you are torn with the guilt of your past and your newfound belief in the promise of the future.

TIG: So, it is this struggle between your sense of gloom and your confidence in the future? This can be heard in "The Father That Must Be Killed," a raucous song that seems like a metaphor for your symbolically ridding the world of your previous self. "This death will complete me," you sing. The album on the whole feels like a metamorphosis.

Morrissey: There speaks a true friend. Whatever happens, I love you. (pause) Let me kiss you.

Morrissey: You're the one for me, fatty.

TIG: Speaking of which, "Life is a Pigsty," is a bit of a departure for you musically. It has touches of current British rock, almost as if it was influenced by Coldplay or Pulp. The background of rain is combined with deep, booming drums that mimic thunder and swirling keyboards like wind. It exhibits a new direction you haven't attempted. Do you feel like you still have unexplored avenues to pursue?

Morrissey: There is a light that never goes out.

TIG: At the same time, you seem to suggest that you feel like your life is waning as you sing, "Even now/in the final hours of my life/I'm falling in love/again and again."

Morrissey: You must please remember Satan rejected my soul.

TIG: You feel satisfied with your life as it is now?

Morrissey: My life is a succession of people saying goodbye.

TIG: That seems to be the tone of "On the Streets I Ran," sort of a retrospective of your life. You want forgiveness for taking the pain of your home and upbringing and making them into your music career. There is an anxiety to the music that matches your anguish in, "A working class face/glares back at me from the glass/and lurches out/forgive me on the streets I ran." This seems like one of the more personal songs you're written.

TIG: And, you apparently dislike people from Pittsburgh, Pennsylvania?

TIG: Well, that's odd. I just wanted to ask you about what might be said to be one of the few true love songs you've done, "To Me You Are a Work of Art." "I see the world/it makes me puke/but then I look at you/and know that somewhere there's a someone that can soothe me." Do you feel that love has returned to your life?

Morrissey: I started something I couldn't finish. Last night I dreamt somebody love me and now my heart is full.

TIG: Morrissey, Ringleader of the Tormentors seems to be a very personal album, not that you don't always seem to be exposing your soul to the world. It, though, seems to be one of best combinations of strong lyrical con
tent and music. What do you say to the people that thought only a few years ago that you were merely a relic of bygone times?

Morrissey: The more you ignore me, the closer I get.

TIG: Indeed. Well, thank you for spending time with us to discuss your music and your life. I know that many of our readers hope you keep producing songs like these for years to come. I know I do.