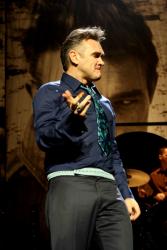 Morrissey at the Paramount

imaginary stella May 9, 2007 no Comments

I consider myself a Morrissey devotee, though I’ll admit I opted for the lower-priced balcony seats this time around (hey, I’ve seen the Mozzer plentiful times, and my guy’s going back to school – gotta protect some of the financial assets!). The view from the balc was stellar, though it was a shame to see both edges empty. I know quite a few equally devoted fans who opted out of attending this show altogether because of the steep price of admission.

Moz played a good lot of material off the latest, Ringleader of the Tormentors, and splashed in some seriously good oldies too. Sadly there was nothing of Vauxhall and I (my fave; I have yet to see him play anything off that save for “Billy Budd”). But to hear the stripped down “I’ve Changed My Plea to Guilty”(a b-side circa 1991) was a mesmerizing treat. When he played “National Front Disco” off Your Arsenal, I closed my eyes and imagined that it was 1992 — I missed that tour because of some stupid high school project, and it’s one of my most regretted moments of all time. The current touring band doesn’t quite do that material justice (Sorely lacking were Gary Day’s swaggering bass, Spencer Cobrin’s frightfully powerful drums, and Alain Whyte’s brilliant guitar work; and the only original member of his band is guitarist Boz Boorer). But the song is still a classic.

And yes, some Smiths tunes found their way onto the setlist. In fact, Morrissey opened the show with “The Queen is Dead” — killer, but strange to open with a Smiths song rather than one from his solo career. “Please Please Please Let Me Get What I Want” and “How Soon is Now?” also punctuated the set, as did “The Boy With the Thorn in His Side” – which sadly got cut short due to issues with the vocals.

At the end of “Life is a Pigsty,” the most theatrical song off Tormentors, Morrissey splayed himself face-up on the floor, feet planted on the drum riser, while the band carried out the concluding two minutes. No one ever said Moz was anything but dramatic, and we all love him for it.

Speaking of his band, they flanked Moz decked in uniform – dark brown shirts, well-fitting khaki trousers: perhaps he’s established his own military, Morrissey’s Army (I’d enlist). Moz himself went through three costume changes – well, not really costumes, but three separate button-up shirts. He tossed one into the crowd, and I’m sure it ended up in 50 tiny pieces, each fan clutching to their own piece until eternity.

Morrissey didn’t shy from interaction with the crowd, constantly grasping outstretched hands and casually chatting between songs. Fun fact: When he outfitted his home in “Moz Angeles,’ he claims to have purchased all the furniture in Seattle – though he said it lasted only one week before it fell apart. He also made wry remarks about Johnny Marr and Spokane.

As always, exuberant fans periodically jumped on stage to hug the man, but the security at this show was one step ahead, crouching in linebacker stance, ready to pounce on anyone who attempted (perhaps in response to an incident in Stockton, CA earlier on the tour, when the encore was cut short after a large fan jumped on stage). Several Seattle fans did make it up on stage momentarily, and as security hauled one poor sod away, Moz faked flailing onto the floor, pretending to have been stabbed – let’s hope this is always a point of comic relief and never the real deal (there are some seriously obsessed fans…).

I’d liked to have seen more vibrancy from the crowd as a whole – and I always wish for better sound at The Paramount. But all said, it was a magnificent night: What evening isn’t made all the better when in the presence of a legend?

The Queen Is Dead
First Of The Gang To Die
The Youngest Was The Most Loved
You Have Killed Me
Disappointed
All You Need Is Me
I Will See You In Far Off Places
Lucky Lisp
Ganglord
The National Front Disco
I've Changed My Plea To Guilty
The Boy With The Thorn In His Side (cut short)
Everyday Is Like Sunday
In The Future When All's Well
Irish Blood, English Heart
Let Me Kiss You
Life Is A Pigsty
How Soon Is Now?
I Just Want To See The Boy Happy