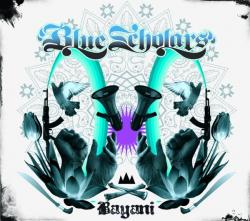 Bayani, the third release from arguably Seattle’s biggest hip-hop duo is easily one of the most poignant, important, and best albums ever to come from the Northwest. I realize that I’m placing an immense weight on the Blue Scholars by making this statement, but after listening to this album, I gladly invite you to disagree with me.

This record is what hip-hop was made for, powerful messages that cover the problems and feelings of the world from Seattle to Baghdad and everywhere and everything in-between. The tracks are delivered in Geologic’s clever, lighting bolt style amplified by Sabzi’s stripped-down, old-school beats and melodies – creating something that’s hard to categorize, which is okay, because this music doesn’t need it. Every song unfolds like a novel; complex narratives are peppered with political and social commentary. Like previous Scholar album’s, Bayani is full of Seattle references, from the U-District to the Mariners, but this album is different in that it branches out, spanning the entire globe.

The album is diverse, eclectic, and unique. Fist-pumping political anthems like “Fire for the People” and the WTO protest homage “50 Thousand Deep” ride seamlessly alongside slower and subtle tracks such as “Xenophobia” and “The Distance,” which discuss racism and the plight of immigrants in America.

This album is an example of the perfect album falling into the public’s hands at the perfect time. It would be a gross understatement to say that we live in troubling times and Bayani serves as the autobiography, the voice, and the seer stone of today’s world. here are very few hip-hop albums where the beats marry so well to the rhymes, creating deep, vibrant, and rich moods and feelings.

The album isn’t all apocalyptic though. The album’s strongest track “Morning for America” is warm and inspiring, creating an air of optimism through its narrative of growing up in modern America. The disc’s closer “Joe Metro” is equally uplifting full of the potential of the world.

Bayani is a summer road trip around the globe. All you have to do is sit back, let Sabzi drive, and let Geologic point out things along the way. The album is very persuasive and makes me think that the world, country, and city would be a better place if the Scholars were in power. Fuck Greg Nickels, I’ll be voting for the Blue Scholars.