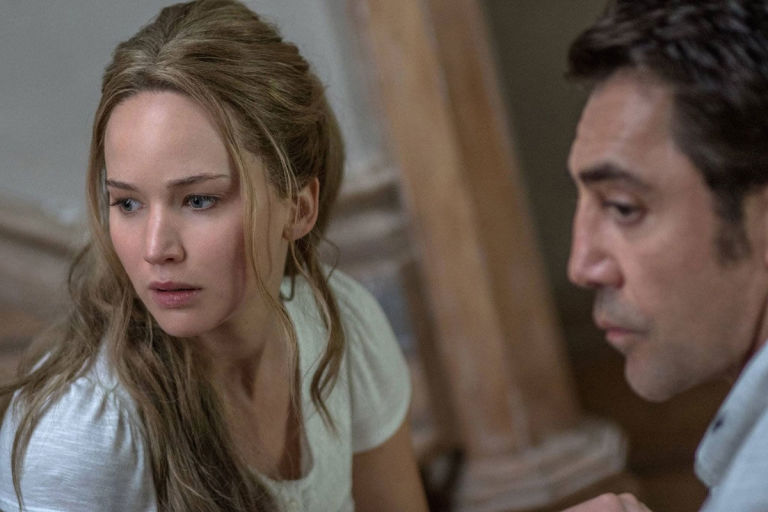 {mother! is playing in Seattle at a lot of places, but we think you should check it out SIFF Cinema Egyptian}

The best way I can describe Darren Aronofsky’s mother! to you without being too spoiler-y is to write down my brain’s reaction to everything as I was processing the film. So, here we go:

Man, Jennifer Lawrence looks beautiful. She looks like a doll. Look at her perfect skin! Look at her ridiculously lush hair! She’s a goddess. Ut-oh, she looks worried. She also looks … so sad. Hmm. Oh, there’s Javier Bardem! I sure do like him a lot. Hey, he seems like kind of a self-centered dick. Oh, he definitely IS a self-centered dick. Hey look, it’s Ed Harris! He’s acting kind of funny. Why are Ed & Javier being so fucking patronizing to Jennifer? What the fuck. KNOCK IT OFF YOU ASSHOLES. Wait a second … was that? What was that WHAT WAS THAT.

Omg! It’s Michelle Pfeiffer! I’m going to temporarily ignore that she’s playing a stereotypical bitter, older woman because she’s fucking slaying the screen. Hey, who are these guys, and why does one of them look normal and one of them look so unhinged — WHY IS THERE SUDDENLY SO MUCH YELLING? WHAT IS HAPPENING? WHAT JUST HAPPENED? I AM SO CONFUSED AND INTRIGUED!!!! !! !!!! !!! Hold on. Was that? Did that mean? I don’t know if I like that so much. Eh, I’ll see I guess.

Hey, this part is really creepy. I like it. Where’s this going? OOOH. Yeah. I’m into whatever is happening here! Wait. They’re back? How come everyone is being so rude? Why are they wrecking everything??! Who are all these people? WHOA. Michelle Pfeiffer. WHOA. Oh man, J-Law is PISSED. She’s gonna let Javier Bardem have it. FINALLY. YESSSSS, GIRL. Oh, except instead, she’s gonna do that. Ok. Whatever. I mean, it IS Javier Bardem. Hold on — things seem to be getting a little more surreal now. Oh, so she’s definitely. Okay, yeah. So maybe? Hmm.

Alright, so now there are more people. A LOT more people This seems kind of … weird. But like a good weird? Oh, Javier’s just like, cool with these complete strangers who showed up outta nowhere tromping all over his house, eating and drinking everything, and breaking shit? Why does Jennifer Lawrence just keep shouting, “HEY!” at everyone? All the time. “HEY! HEY! HEY!” That seems like kind of a waste to me. Shit’s starting to get really out of hand. This is going to be bad.

HOLYCRAP. Super train to crazy is happening now! I can’t even keep up with everything that is going on in the film! WHAT THE FUCK IS GOING ON?!?!?! HOW IS THAT A THING? IS THIS A DREAM? I DON’T UNDERSTAND AAAAAHHHHH! WATCH OUT WATCH OUT WATCH OUT. Oh, phew. Okay. Sure. This is sort of nice. And almost peaceful. But I’m still confused about … OMG NO NO NO NONONO NOOOOOO I CANNOT BELIEVE THIS IS HAPPENING RIGHT NOW BUT I KIND OF LOVE THAT IT IS BUT PEOPLE ARE GOING TO FREAK THE FUCK OUT WHEN THEY SEE THIS.

Augh…nope. I cannot deal with this part. This is fucking brutal. How many times are they going to do that? Too many. I mean, why does this even need to happen? It doesn’t. It really doesn’t. Oh, wow. So now she’s gonna … and then. Oh man. Whelp. I guess that’s the end then …. Or not. WAIT. THAT’S WHAT THIS IS ALL ABOUT?!?!? That? That’s it? Oh. I. wish that hadn’t been the thing. I was really enjoying myself up until then.

In the end mother! didn’t leave a terribly positive impression on me, but if you’re curious it’s probably worth the price of a ticket just for you to see how fucking insane it gets. Also, this cast is incredible. Ed Harris, Javier Bardem, and especially Michelle Pfieffer all totally blew me away. And Lawrence, well, JFC. The girl broke her diaphragm because her Director/boyfriend put her through hell to make a movie. I don’t really think it was worth it, but you might.

{fun fact: I can’t look at the name of this film without hearing Andy Summers say, “mother!”}