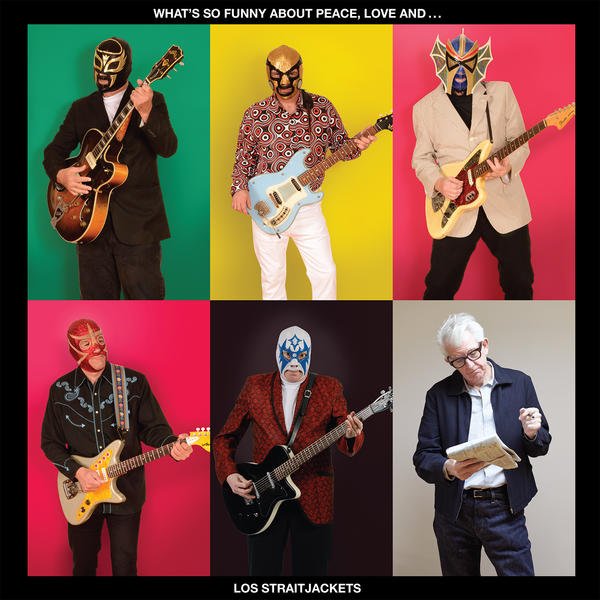 Recommended Show: Los Straitjackets and Marshall Crenshaw at the Tractor on Saturday {Sept 16}

Nary a band in lucha libre masks can match Los Straitjackets. Always an enigma wrapped in a (wrestling) mask, they’ve bent strings and chugged along for decades, and now they’re creating a next chapter to the series of holiday music tours with the Jesus of Cool, Nick Lowe. In a word: Covers, of a heap of Lowe gems. You’ve waited for Los Stratjackets to do just this, tackle Lowe’s sardonic, wry, cool-as-ice delivery.

You expected, though, surf reverb rave-ups, which you get on What’s So Funny About Peace, Love, and Los Straitjackets, which you get on the opener, “Shake and Pop.” An acerbic, biting Lowe classic, the tune thrums and twangs in Los Straitjackets’ hands, a gently gritty pile driving. Yes, they tackle “(What’s So Funny ‘Bout) Peace, Love, and Understanding,” with a fluidity you’ll be hard-pressed not to find danceable. ‘Course you get a lot of soul, especially on the slow-dance soul groove of “I Read A Lot” and the down-tempo beauty of “Cruel to Be Kind.” You have to imagine an open road, or open windows, and an any-day readiness to just marvel at what reverb and deep feeling get you when they’re peaking.

Oh, it’s all gemwork and hipsterism, as if a series of dancers was sashaying and swaying, hands raised to the sky, just in front of you. You need to immerse yourself.

It’s no small thing to get a whole bunch of twangy lucha libre-wearing terrificness. It’s an even bigger thing to get that dose with a helping of Marshall Crenshaw on the same bill. In the same way you hear Nick Lowe and think, “how did I not listen to this shit for decades?,” you hear Crenshaw and think, “how can I not listen to this every day from now on.”

Power pop? Pub rock? Like a double rainbow, it’ll prompt you to say, “what’s it all mean anyway?” If you’re at the Tractor on Saturday, at least you can ponder that with a rye Manhattan or something less posh and more workaday in hand, watching a whole mess of killin’ guitars keeping you warm inside.

(with Nick Lowe, but they aren’t playing with Nick in Seattle)