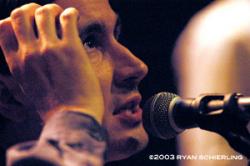 As word of John Darnielle continues to spread, it's going to get harder for The Mountain Goats to play smaller venues like The Tractor. His latest visit sold out hours before they got on stage as proof-positive of his burgeoning popularity.

Though his last couple of releases have veered away from the pure lo-fi aesthetic of previous albums, his touring band continues to just be Peter on bass backing up John's amplified acoustic guitar. And while they might be touring to support a new album, We Shall All Be Healed, the setlist happily ranged over seven different albums. He also debuted two new songs: one ("Twin Human Highway Flare") he claimed to have never performed live before, and the other ("Dance Music") was a song from the album he's planning to record next. He announced that it would be about his family, and when one girl cheered, John joked,"You don't know my family!".

While the crowd's attention was slightly lost on the quieter songs from early in his career, much of the set was treated with a quiet reverence. Conversations at the bar even seemed to tail off during a poignant moment in "Tallahassee". Of course, this was off-set by numerous screams for requests and even a few come-ons to John during "It Froze Me". A bizarre request for a non-Mountain Goats song was taken in stride. With increased popularity, loud drunks and casual fans seem inevitably to follow, but John seemed to appreciate the enthusiasm.

As seems to be the norm lately, John ended the encore with a rousing version of "The Best Ever Death Metal Band In Denton" and everyone got to scream along with the chorus. Normally that would be the end of it, and Peter even started to bring out t-shirts to sell, but the crowd wouldn't stop cheering. John was cajoled into playing one more song, to send the audience home a little happier.