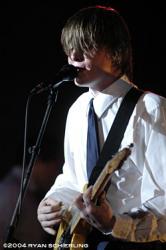 Because of my "under-age" status, I was only able to see two of the three Death Cab for Cutie Seattle homecoming shows {May 6th and May 8th}. They were the best nights of my sixteen year old life.

The anticipation leading up to the first of the three consecutive nights of homecoming shows was tremendous. I had a countdown from 90 days prior and bought my tickets three minutes after they went on sale (and that delay occured only because the TicketWeb server was busy). The day of each show, I stood outside the Showbox for at least three hours before doors opened.

It was so much more than worth it. I openly admit that I am a Death Cab fanatic and nothing negative about the Cab boys will ever come from my mouth, er, fingers on the keyboard. Instead, I am going to focus this review on the final night of the Death Cab homecoming show series in an attempt to limit the chances of me over-babbling about how much I heart DCFC.

{Ed note: Is there anything more inspiring than the earnestness of sixteen? igLiz and I likewise attended (and adored) the final stop of the Death Cab tour, but we found our enthusiasm nearly jaded compared to our intern's OMIGOD OMIGOD OMIGOD enthusiam. ~igDana}

{Ed note: That's right! Instead, we're just going to interject into her review with our comments. It's not because we were too lazy to write our own review. But for the record, Hutch Harris of the Thermals opened the final night of homecoming shows and was INCREDIBLE. Ben Kweller, the second opener, wore jeans so tight that I blushed. Our intern might not have noticed or mentioned the above as she was too eager for the first sight and sound of her heroes, but I thought it worth mentioning. ~igLiz}

Of first note, my "national indie rock heros" won the best dressed award on the final night of the three shows. They came out on stage dressed like young professionals with white button-downs, ties and briefcases (fashionista front-man Ben Gibbard donned a three-piece corduroy suit). They quickly flipped open their briefcases to pull out guitar picks and then, burst into "The New Year." They seemed enormously happy to be back home, and goodness, the audience was obviously delighted they had returned.

{Ed note: And what was that theme music they played as they walked on to the stage? ~igDana}

{Ed note: It was the theme song from the BBC masterpiece, "The Office." Insert hilarious soon-to-be-classic Office quote here. ~igLiz}

Sound swirled around me in that enchanting Death Cab fashion. I kept catching bits of the keyboard sequences and guitar hooks repeating in my subconscious. There was an extended version of "We Looked Like Giants," in which Ben worked from his own drum kit. I didn't think anything could get better than the album version. That one masterful performance was enough to make the night worth those hours waiting.

The set list was a charming blend of the newer songs (i.e. "The Sound of Settling"), old songs (i.e. "Pictures in an Exhibition"), older songs (i.e. "Prove My Hypotheses"), favorite songs ("405") and sacred songs ("Transatlanticism"). The set list, the show, everything; it all just fell perfectly into place. These two nights of shows were the best nights of my sixteen year old life.

Throughout the show there were plenty of moments that still amaze me. But one moment that didn't amaze, but rather frightened me, was when women's underclothing was thrown onstage. Multiple times! Female under-garments were hucked onto the Showbox stage during a Death Cab show! Three pieces to be exact!

The most spectacular moment was the finale. Remember, this wasn't just the end of the show – this was the end of the entire tour. Some could consider it the end of an era. And the boys marked it in rock n roll grand finale style.

Whilst performing the final song of the night, "Prove My Hypotheses," they banged geetars and threw drumshticks. And if ending the night with a song that is only available on an ultra rare 7" (ok, for those in the know, an old recording of it is on You Can Play These Songs With Chords) wasn't enough, Chris and Jason climbed the drums while Ben and Nick stood on the amps to finish the song. Before leaving the stage, they tossed their guitars into the air and pushed/shoved/dismantled the stacked amps and drumset like veteran arena rockstars. The audience was left stunned and happy.

Now, you tell me, doesn't it feel fuzzy inside to know the boys are safely back home? And just to be like every other Cab fan, I sign off reminding you: Death Cab for #!.