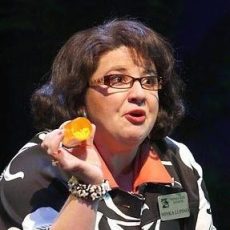 It's been an unusually cheap off-peak travel season for visitors to the Pacific Northwest. My parents are coming in from Arkansas this weekend, a friend from the same area will be visiting Portland the same days, and several other friends-of-friends and coworkers are expecting red-state visitors in the coming weeks.

Which leaves us all looking for creative ways to pass the time with those out-of-town loved ones. And if you're like me (having had plenty of the Needle and the Underground Tour over the years, thank you very much) you want places and events that show off Seattle's unique vibe while remaining relatively safe. Something funny that you can talk about later and that everyone can understand. Good, but accessible. Edgy, yet light. Relatively inoffensive, but with enough sauce and sass to keep everyone interested.

I can offer a suggestion.

Murderers, at the Seattle Rep's Leo K Theatre thru November 4, is really three one-person short plays about the goings-on at Florida's upscale (fictional) Riddle Key Retirement Community. Three disparate characters have committed murder there, you see, and they spend about a half-hour each gleefully confessing their diabolical schemes. It adds up to a mostly entertaining, intermission-free 90-minutes, perfect for a weekend matinee.

Our titular murderers are gold-diggin' gigolo Gerald (Mark Anders), elderly hausfrau Lucy (Joan Porter Hollander), and genial busybody Minka (Sarah Rudinoff), and they have their reasons for what they do. Some better (and wickeder) than others. Anders' section suffers from of an annoying performance and lackluster comic timing, but grows compelling by the delicious twist ending. It's over with quickly, too, and the feisty Hollander puts to rest any early misgivings with her jilted-lover yarn. (Yes, an old woman dropping the f-bomb is funny.) And Sarah Rudinoff … well, she's outstanding as ever, and her bit is, not surprisingly, one of the highlights of the theater year.

Playwright Jeffrey Hatcher's resume runs from nice (TV's Columbo, the stage adaptation of Tuesdays with Morrie) to spice (films Secretary and Boys Don't Cry), and in Murderers he blends appropriately-retro pop culture references (Doris Day, Rose Marie, What's My Line?, Marcus Welby M.D.) that my parents will totally get with a dinner-theater sensibility they'll enjoy. There's an offbeat black-comedy ridiculousness that I like, too; it keeps the proceedings several steps above Murder, She Hopes and Diagnosis Mundane.

The mix is most effective in Sarah Rudinoff's section, which is the last and best. To call her a comedic powerhouse would be to understate her talent: she'll have you in tears, and make you forget the "one-person" part as she relates the lurid tales of numerous characters who inhabit her story. (Not bad for someone who hasn't been in a play since 2005's Wonderful Town.)

I've said it before, and I'll say it again: La Rudinoff is worth the ticket. And worth my time sitting through Murderers again… with some sure-to-be-delighted Arkansans in tow.