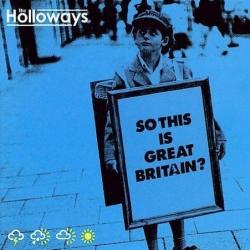 So This Is Great Britain?

In a British music queue lined with Arctic Monkeys, Kooks, The Fratellis, Klaxons and more looking to win our affections, The Holloways may find it difficult to receive much notice with So This is Great Britain?. The bouncy, laddish 'meet me 'round the corner at the pub for a pint' sound with a darker message is a fun listen but doesn't stand out.

This is an album of contradictions. The cover art reeks of Depression era gloominess. The title suggests a darker questioning of the British identity (How great are we really?). The music is a complete juxtaposition. The first beats of the opening title song "So This is Great Britain?" are upbeat and reminiscent of James' "Sit Down". The music takes its place alongside The Wonder Stuff and Madness. The current single, "Generator" reinforces this light-hearted feel "I can get a record player and a generator/generate the music that makes you feel better". The music is the spoonful of sugar to help the lyrics go down.

In case there was any wonder of the tone The Holloways want to set, the lyrics in "So This is Great Britain?" say it all, "So this is Great Britain?/Welcome aboard/a sinking ship that's full of shit and someone's nicked the oars." This isn't going to be The Love Boat. This isn't even going to be the S.S. Minnow. The album's subjects range from whores (the media type and beyond), tarts (see whores), drinking, consumerism, homelessness, malcontent, juvenile delinquency and teen pregnancy. So much for bouncy, light-hearted and care-free, The Holloways would suggest Britain is pogo-ing to its demise.

I'm reminded of the Pet Shop Boys' song, "Miserablism" from their album Alternative. Being miserable and questioning can come with a danceable pop beat. So This is Great Britain? is definitely an album for dancing. Just don't listen too closely to the lyrics.