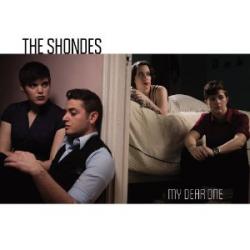 The Shondes are one of those bands I adore personally even if they aggravate and worry me. There’s so much goodness in how they carry off an openly avant approach to the traditional femme-fronted punk-inspired style, beginning with the cabaret clomps and lurches of “My Dear One,” the opening and title track to their latest (second record), and beautifully shown by the violen of Elijah Oberman throughout. New guitar player Fureigh joins the long running, far-touring Brooklyn band with a more subtle, playful approach than the angular spazz outs of their last player.

But lead vocalist and bass player Louisa Solomon anchors and drives the band with a fury and finesse few frontwomen have these days. My Dear One is described by their label as a “heartbreak narrative” and it sounds like it. Most bands are made by their drummer and Solomon is lucky to have Temim Fruchter to throb and fly over. My favorite song is “You Ought To Be Ashamed,” a stomping number full of incredibly precise little details about a user-loser, who ruins simple things like “a pre-show shot of Jameson,” and whose behavior strikes the narrator as a dull parody of stories by “Bukowski, Updike, Kerouac.” The subject frantically, boldly cut down in this psychodrama, it makes John Cale’s song “Chicken Shit” about his tour-stopping guitarist who quit the band sound like a gnarled belch. For vindictiveness, its impossibly catchy melody and shuddering, multi-vocal climax can’t be beat, even by fathers of the form.

A casual listen throughout My Dear One reminds one of Amanda Palmer and other Gothy relationship-trauma artists, yet the band’s obsession with politics (found in lyrical metaphors about Jews fighting for a free Palestine, and a publically evangelical devotion to veganism) and their own devotion to each other makes The Shondes seem more like a female-fired up Clash than another raging narcissist’s harem. My only criticism is that the unrelenting seriousness starts to seem melodramatic. In a weird way, The Shondes remind me of a New York, evil twin Parenthetical Girls, dual in both gender observations, but with Zac Pennington aiming for creepiness and wit and Solomon focused on cutting lamentations. And where the Parenthetical Girls are often minimalist or in a happy daze in their 80s sound touchstones, The Shondes go crazy with the vanilla clove and black espresso Peter Murphy, Sisters of Mercy big rock flutter.

It’s The Shondes’ willingness to be so open about their beliefs, including spiritual ones (“Gather Up Your Prayers,” Solomon’s line in “My Dear One” that she’d “rather be with God than with you”), that worries me if they’re overlooked. Possible band inspirations aside, this is no crowd-pleasing piano-pounding fake-feminist flavor of the daily blog. With a little humor, and more tempos than inevitable overdrive, they could be one of the real world’s favorite bands of the next decade. At least they’re already living in it.