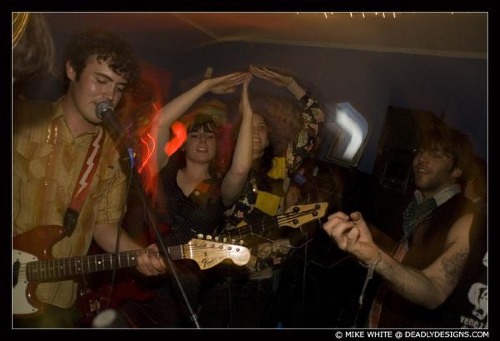 Ever since it was mentioned in the comments section of the Tullycraft.com site a few weeks ago, I've had my sharp obsessive eyes prowling the internet for substantiation to the statement made there by "Nana Grizol member Ian R" "I should also mention that the new album is coming out AWESOME and also that we're doing a west coast tour next month!! And that is especially the Pacific North part of the West!"

Finally – the moment I've been waiting for since I first heard Nana Grizol's album Love It Love It in early 2008 has come!

TIG HQ received an email from Merge Records this morning that the Music Tapes are heading west for a tour our way. Hearing from another source a couple weeks ago that they were going to tour with the Music Tapes, I ran from the bus (where I read the message online but didn't have access to scour the web to connect the dots) to the nearest internet connection to confirm the details on Nana Grizol's MySpace page:

Seriously, I can barely contain myself, let alone figure out how to bide time until the show. I will do my best to sit here… not look anxious… and… begin my campaign to convince all of you to join me at the likely my favorite show of 2009.

One way to convince you to go see the band that recorded my favorite record of 2008? Go listen to their songs on MySpace, read some of my Nana Grizol Chick-ish materials, and mark your calendar.

Look at that tuba go!