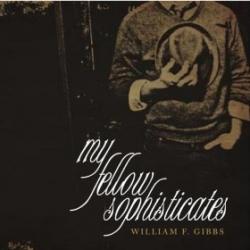 My fellow sophisticates, I present to you William F. Gibbs, a sophisticated singer/songwriter whose album, My Fellow Sophisticates, is an amalgum of musical styles that are at once diverse and cohesive.

Put out by Old Man Records, think of Gibbs as a Vaudevillian player. That is to say his album is like a big step back in time, each song a different act, each to be appreciated in its own right. And yet, the album feels fresh indeed.

"Darling, You Were Beautiful Once" sounds like something coming out of a 1920s speakeasy. "Oh Pollyanna" starts with an organ then turns into a Ryan Adams-esque folk song. "Here Comes Your Steamboat Brother! Here Comes Your Freightline Sister!" sounds like you might imagine – a salloon-y foot tapping tun that moves forward like a steam engine whistling through a sleeping boom town. "Ankle Deep in the Atlantic" is sweepy swoony slow and hazy. The piano plays and his falsetto voices floats atop it.

So, what kind of music is it, exactly? Americana, I suppose. It's got some country and some folk, some soul and some rock, a pleasant blossom of musical types that is both old and new due to Gibbs' delivery and the way he shapes his songs.

The South Carolinian's debut album, there are a couple of low points, like the funk-laced "Streetfighter" and the bland "LA Money," but overall he's in a unique position to tell good stories with good instrumentation (trombones and toy pianos are employed). For a first album, My Fellow Sophisticates is just that, sophisticated.