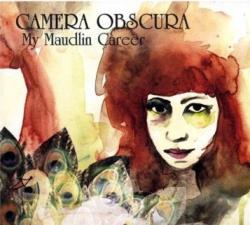 Diana Salier June 5, 2009 no Comments
I’ll be the first to admit that when I heard there was a new Camera Obscura record coming out, I expected a new collection of indie pop tunes in the vein of “Lloyd, I’m Ready to Be Heartbroken” or “Let’s Get Out Of This Country.”  The first track on My Maudlin Career is “French Navy,”  — also the album’s first single — a string-heavy, upbeat song that stays true to its pop roots by only lasting three minutes and reminds me a lot of “Lloyd…”
But the fun hardly stops there; the only other really pop-ish songs are “Swans,” “Honey In The Sun” and standout track “The Sweetest Thing” — the rest will leave you dazed and introspective, and maybe even lonely.  Lead singer Tracyanne Campbell’s melancholic vocal delivery verges on the country-esque, and even recalls Jenny Lewis on the plaintive “You Told A Lie.”  Whether she’s asking “do you still miss the way that I hold you?/in other towns and cities, who’s holding you tonight?” (“Other Towns And Cities”) or lamenting the age-old “just friends” syndrome in “James” and “Careless Love,” it’s impossible not to have your heart break just a little bit.  The latter is the absolute high point of My Maudlin Career, and features Bjorn Yittling’s (of Peter Bjorn and John) swelling horn and string arrangements, which inevitably give the song a cinematic quality.
There’s a moodiness throughout the 10 songs that is perfectly conveyed not only via Campbell’s lyrics, but in the slightest organ and violin melodies of “Away With Murder,” or the rolling drumbeats of “Forest and Sands,” which sound like they’re about as ready to give up as Campbell herself.
It’s hard to describe why listening to an album as atmospheric and sad as My Maudlin Career would be a pleasant experience, but it’s probably best understood with a bottle of whiskey on the bedside table and a few quiet hours alone.