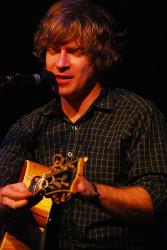 Nada Surf only wants to make you happy

This night turned out to be close to perfect for me, if not actually perfect.

Let me get this out of the way first: The Triple Door is the most special place to see a show I’ve ever been to. I loved the Crocodile and am almost always treated well at the numerous clubs I go to, but the Triple Door is a remarkable place to see a show. The staff is always friendly, but this night they went way beyond the scope of what could reasonably be expected by accommodating me when I mistakenly thought I had a +1 for the sold-the-hell-out-way-in-advance show, and then seating me in the best seats in the place, the very front row. Three seats down from me was a dear friend whom I rarely see, and right next to me were photographer Laura Musselman and TIG contributor JFlores, both of whom I met for the first time that night and found to be quite lovely people. Throwing objectivity out the window, even if the band sucked (which they, in no uncertain terms, did not), I was bound to going home blissful.

Getting to see a band like Nada Surf acoustic in a venue like the Triple Door is breathtaking. People who listen to Nada Surf usually do so for the catchy harmonies and smart lyrics, and the band sounded crystal clear through the Triple Door’s PA.

The band consists of Matthew Caws on vocals and guitar, Daniel Lorca on bass and Ira Elliot on drums, but rather than play a drum set, Elliot sat on a box and tapped on it to simulate the bass and snare drum sounds. Another musician told me afterwards that the box has strings in it just for recreating the drum sounds. I hadn’t seen anything quite like it before. He also had a tambourine around an ankle to replicate the cymbals. After the first song (“Happy Kid”), the band was joined by cellist Phil Peterson (of Kay Kay and His Weathered Underground) throughout the entire set. Caws joked that he read in The Stranger that Peterson was playing with them before he was formally invited to. For a few songs, Gavin Guss (formerly of power-pop band Tube Top) played joined the band to play the piano parts on a grand piano.

The band’s latest record, Lucky (Barsuk), was set to be released 6 days prior to this show, so about half of the songs on the setlist came from that record; but the 2002 album Let Go was also very well represented throughout the evening. When discussing the new album, Caws humbly encouraged people to pick up a hard copy of Lucky to support record stores because they are struggling to stay open during this difficult economy. When he explained that, he didn’t sound funny or confident (which most of the banter was) but nervous, as though he shouldn’t be telling people to buy his record.

Nada Surf is a rare band that crafts songs that sound equally well acoustic and plugged-in. Caws’ harmonies worked especially well without being obscured by reverb and distortion. Most of the songs were slowed down and mellow but the evening ended in a celebratory fashion. Playing “Blankest Year,” Caws got the crowd to sing along to the “ah fuck it” parts in the chorus. Three women, all of whom are friends and readers of this site (including Imaginary Chona, whose photos are, per usual, simply stunning), ran on stage to dance.

It was a great moment, the one time throughout the night that the band let loose and rocked out. I could think of no better way to end what was already a glorious evening.