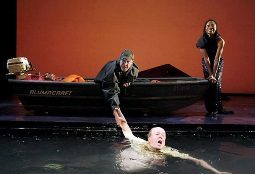 The Seattle Repertory Theatre's Emerging Critics Circle provides aspiring writers from middle schools and high schools around the Puget Sound region opportunities to see plays, talk to local critics about them, and hone their critical writing skills. (I'm just about over my bitterness at not having an education program remotely as cool way back when I was in high school.)

For the second year in a row, I was invited to give the young'uns a little spiel about writing and "the online world" ahead of a matinee performance one Saturday, then participate in a follow-up writing workshop the next weekend. And for the second year in a row it coincided with a Southern play — in 2007, Fire on the Mountain, a thrilling bluegrass musical revue about West Virginia coal miners, and this year, The Breach, a muddled dramatic effort about New Orleans and Hurricane Katrina. (It plays at the Bagley Wright through February 9.)

Like last year, I was most impressed with the students' efforts and enthusiasm; it's great to witness such proficiency, skill, and passion for theater and for writing in young folks. Some highlights from their Breach capsule reviews appear below (denoted by first names for privacy purposes):

Kat: "Essentially three plotlines written by three playwrights – Catherine Filloux, Tarell McCraney, and Joe Sutton – The Breach is a production that addresses the flooding of the city of New Orleans after Hurricane Katrina, in addition to drawing the viewer to examine – or reexamine – the meanings of life, hope, and understanding."

Aleta: "Technically impressive, the show lacks a human connection to the audience. In its place, a myriad of crisscrossing messages, political statements and fanciful symbolism force the stories to misplace the humanitarian side of their telling."

Aaron: "The Breach is not a play which one walks out of feeling that basic human decency will prevail in even the darkest hours; instead, it leaves the viewer with that unsettling feeling: a twisting in the stomach, a pang in back of the mind. This is not only effective, but right, for the afteraffects of Hurricane Katrina are stilling being felt."

Finally, a full capsule review that I wish I'd written myself:

Jasmine: "What happens when a city is overwhelmed by a natural disaster? The Breach, now playing at Seattle Repertory Theatre, attempts to answer this question, perhaps too boldly, as it explores the devastating effects of Hurricane Katrina. In a dense arrangement of three separate stories of survival and perseverance, playwrights Catherine Filloux, Tarell McCraney, and Joe Sutton achieve breadth, but no depth. Although an onstage cascading rainfall and a 6,384 gallon water-filled pool make for some great eye candy, too many issues — politics, race, displacement, dysfunctional family — create a contrived melodrama that lacks the vigor and emotion to evoke a meaningful reflection about the New Orleans disaster."

Yep. The kids are all right.