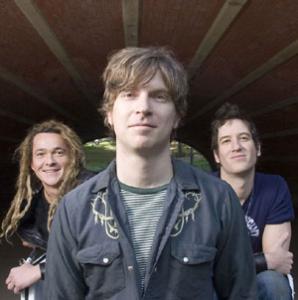 It was, I guess, not too long ago, that I got a late night phone call and was asked if I could interview someone from Nada Surf the next day. At the time I wasn't really sure if I could, and really, I had nothing to say to anyone from Nada Surf other than that I really liked their last record, 2003's Let Go, and that I would happily purchase the new one once they made their way through New York on tour. (I had no idea that they all lived in New York when I had this thought).

So, yes, the interview was set up. After speaking to someone in L.A. about schedules (my availability confirmed after checking my next day's work calendar), I was ready, a mere couple hours after getting the initial "Would you be interested in interviewing someone from Nada Surf tomorrow?" askance. I listened to half of the new record and went to bed around one in the morning.

The next day I went to work only to find that a meeting had been scheduled some time while I was on the subway (damn these account people) and I was going to have one hell of a hard time making the interview call. Luckily, as meetings tend to do, the meeting before the 'Infernal New Meeting' ran late, and the 'Infernal New Meeting' was pushed back so that we could have lunch. I rushed to a telephone. I called Ira Eliot, the drummer from Nada Surf.

We talked for a while about the three old records, ("High/Low," "The Proximity Effect," "Let Go") and for a while about the one new record. The new record, entitled "The Weight is a Gift," will be out September 13, and, according to Barsuk Records' website, will include "11 perfect pop songs," as well as a bonus disc with 4 additional songs. (Is this because the extra 4 songs just aren't perfect enough? Was the guitar out of tune? Or better yet, was the theremin out of tune? Wouldn't that be awesome, if Nada Surf had a theremin? [Rest in peace, Bob Moog.])

Being the stellar interviewer I am, I asked Ira to tell me about the new record:

"I think a lot of people are going to like it… The first three were primarily based on interpersonal relationships; but this record is formed by a different type of relationship. Matthew [Caws] went through a very tough personal year, a tough year emotionally, and had to deal with the kind of stuff that makes you grow up really fast… I may not have handled the situation with such grace as he did, and that's kind of the schematic of this record. The music becomes your sort of therapy, a sort of catharsis."

And I had to agree that the record was quite different in tone than the past three. Or at least the half of the new record I had heard was quite a bit different. (Side B might have been completely the same as "High/Low," for all I knew) On "The Weight is a Gift," the band has moved forward into the direction "Let Go" alluded toward, and they've come out with an even more mature, constructed, sincere sound. Almost a change as simple as they've just gotten better at playing and writing music.

Production wiz and music SUPER! < insert theme music > Nerd, Chris Walla, took the band into his Hall of Justice in Seattle, as well as into John Vanderslice's (equally wizardly in terms of production, not nearly as SUPER! Nerdy) Tiny Telephone studios in San Francisco. Walla played along as co-producer and co-band member for the recording of "The Weight is a Gift."

How was working with Walla? I asked Ira.

"Walla's kind of a nutbag. Supernerdy, a quintessential music geek guy… We'd spend evenings just listening to Rush… But he was very important to the record, and definitely left an imprint on the record, no doubt about it."

And, since it was supposed to be an interview, and not just the conversation about music and stuff we were having, I had to ask Ira more questions about himself:

Are you excited about the new record? About getting on the road and sort of just pushing the music out there?

"I'm kind of jumping out of my skin. We did a video, and we filmed it in Lithuania. We went to this art park that had sort of gone into disrepair, with all these 50s TVs and stuff right out on the ground, like a Grandaddy video or something. So we spent a day and a half in Lithuania doing a video [for the track "Always Love"]"

[Note: For the life of me, I don't know why I didn't ask why they did the video in Lithuania]

And then, somewhere along the way of our conversation, I was asked to sign off for something at work, and had to pause the conversation. After apologizing, we somehow started talking about Ringo, and why he is awesome. Ira was going to be interviewed for a drummer magazine, and so we naturally talked about drumming. Ira loves Ringo. And he loves playing the drums.

"Ringo is awesome. He didn't need to be some Berkeley chopmeister to do it. They [the Beatles] just understood each other."

Really, the whole interview, during which I conceded that I was passionately in love with the new, string-laden version of the song "Your Legs Grow" on the new record — it was previously released in somewhat different form on Barsuk's "Future Soundtrack of America" compilation that coincided with the 2004 election. It was more of a conversation about drumming than a true interview. But really, I'm not very good at interviews. But I do know a good song when I hear one, and "Your Legs Grow" is a beautiful, beautiful song. I told Ira so, and he said thank you. (That is as good an interview move as I know). Then we ended the interview with his statement about what drumming should be:

"Drumming should just be kaboom!"