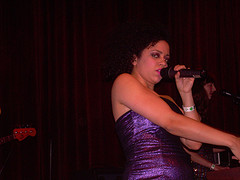 Prior to heading down to Nectar, nearly every person I talked to about this show told me the same thing: I’ve never heard of New Young Pony Club. While that is undoubtedly true, chances are most people have heard the five-piece British electro-disco band, at least briefly: the band’s ridiculously catchy single “Ice Cream” was featured in an Intel commercial last year. In many regards, it's close to being a perfect bubblegum pop song, with simple, bratty lyrics (“I can give you what you want, I can make your heart beat short”).

The music, with its funky bass lines and keyboard parts, was made for dancing. I heard it several times in clubs and on KEXP, but never really too much to get tired of it. When the band finally finished a debut LP Fantastic Playroom (released in the US last August), it contained nine other songs just like “Ice Cream” – it's a fun, dance pop record with tons of hooks.

Last Saturday the band played to an energetic and lively crowd at Nectar. I arrived to the club around 11:15, nervous that I had missed the set (while trying to say goodbyes at a Halloween party thrown by close friends), but the band didn't go onstage until midnight. Usually 45 minutes (at least) between bands would seem like an eternity, but Nectar’s booker Colin Johnson kept the masses entertained by spinning some really great dance songs before NYPC found its way to the stage. With the songs he played (including a remix of “Ice Cream”), you got the feeling that this was a band he took unusual joy in booking.

Late in the set, charismatic frontwoman Tahita Bulmer said the band was nervous about playing in Seattle because only eight tickets had pre-sold when they checked last, but the club was pretty damn packed, the good kind of packed that wasn’t quite sold out, but close. Unlike the Justice show at Neumo’s two weeks ago, there was just enough room for people to dance if they wanted to. And for the most part, they did.

Throughout each song I saw lots of people jumping up and down and waving their hands and just all-around having a good time. The band played for close to an hour, sounding tight but not rigid while going through nearly every song off of Fantastic Playroom plus a couple of b-sides and a spot-on cover of Technotronic’s late 1980s hit “Pump Up the Jam.” I suspect that the cover was a surprise to most people there (I had read on a couple of blogs the band played it at CMJ last week and found a live video on YouTube beforehand), yet the band (and especially Bulmer) played the song like it was their own. Even though the band played its most recognizable song (“Ice Cream”) in the middle of the set, the crowd’s reaction to the band grew stronger as the night went on, with nearly every hand up in the air for the last two songs, “The Bomb” and “The Get Go.”

This was Halloween weekend and lots of people were out looking for a party. Some were in costumes, most likely coming from a Halloween party (like me) but this wasn’t billed as a Halloween show or party. To the few hundred people at Nectar Saturday night, though, that didn’t matter. It was an all-out dance party.