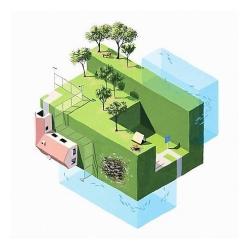 How much production is too much? Where is the dividing line between an album that is intentionally lo-fi and one that is actually crafted on limited means? Should we even care? Maybe not. But the first track of Brad Laner’s Neighbor Singing begs at least a quick inquisition into production protocol. The gritty, ‘70s tone of “Find Out” is certainly not a soft intro, but rather a heavily played-wth guitar-and-tambourine extravaganza that quickly reveals Laner’s influences, peers, and collaborators (Eno, Veitver, and Caribou are all touted).

The schizophrenic twelve-song effort is in fact born from a 40-song effort selectively paired down by Thom Monahan. Understandably, the songwriting of a 20+ year veteran (Laner) matched with the knob-tweaking of a credentialed producer (Monahan can boast work for Devendra Banhart and Lavender Diamond, among others) will spawn a no-nonsense aural freakout.

Having assumed one role or another in no less than 20 groups, and running the gamut of various record label sizes in the process, Laner knows his stuff by now. And despite his best intentions to shock and awe with his fist-to-the-gut opener, the meat of his latest album is an Eastern-influenced, Beatles-tinged float through the ether (the tenth track, “Falling Time,” is the softest of found-sound segues you’re likely to hear for a while).

There may be more to absorb for the studio-wisened audiophile than the indie rock denizen. For the latter, track two, “Out Cold,” is the sure bet. Grounded by a galloping bass thump, the light jingle happens upon the right mix of melodic pop and mood-altering production.

Coincidentally, or perhaps not, Brad Laner falls just before Brian Eno in an alphabetical mix. So sit on that while you give this one the headphones treatment.