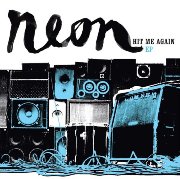 What's up with the Australians lately? They've been pretty quiet since the days of AC/DC and INXS, but in the last few years, they've been spinning out bands that aren't exactly "down under" anymore. The "Aussie Invasion" tour of 2004 included Jet, The Vines, The Living End, and — as an opening act — Neon, another surly Australian gem that seems just around the corner from its own fame explosion.

Neon, a trio composed of Josh Bitmead (vocals/guitar), Britt Spooner (bass), and Jamie Gurney (drums/vocals), relies on catchy guitar hooks and sweet, sticky melodies to create genuine, undiluted power pop. Their songs are guitar-driven, and seem to combine elements from both the rock of the 70s (think Cheap Trick, one of their confessed favorites) and the grunge era.

Neon is perfect music for the arrival of summer. It's clean and bare-bones, happy and punchy but with a kick of mild insurgency lurking in the background. Yet their spirited, all-in-good-fun exterior masks a slightly deeper side. The grunge-inspired track "Dizziness" echoes the theme from so many grunge bands of feeling lost in your own body. "Dizziness makes the world go round," Bitmead declares, evoking that disconcerting feeling of being unsure of your life and the path you're on.

But again, this introspective quality is minimal. It's energetically covered up by songs like "Happy Going Nowhere". Yes, the title is a bit cynical, but is soon bemusedly forgotten by the simple, energetic chord structure almost reminiscent of a 1950s pop song. "All I Want" is another vigorous, guitar-fueled track, and "Into Your Eyes"…well, good luck sitting still during this one. But while comparisons to Nirvana and Jet are the things musicians' dreams are made of, Neon should take care not to dissolve too much into other bands' sounds. They need to keep themselves distinct and take some more musical leaps and bounds to make sure they don't fade into the shadows.

As seems to be more and more common lately, Neon began heating up in the U.K. before making its bigger mark on US audiences. Now, having recently toured with Muse and inking a deal with V2 Records (home of The White Stripes, Mercury Rev, and Powderfinger, among countless others), Neon is poised to become the next Australian power pop hit.