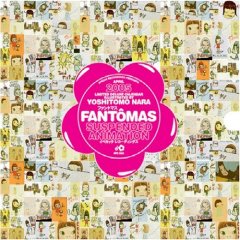 Would you trust Mike Patton with your children?

The workaholic mad genius has put together a delirious mix of thrash, noise, avant-jazz, and his own trademark vocal acrobatics-in-the-service-of-Satan. That's nothing unusual — relatively speaking, of course — but this time out, his short-attention-span genre-hopping is in loose tribute to children's music and cartoon soundtracks.

Not a straight tribute in the sense that Director's Cut was, Suspended Animation features no covers, but takes the sing-song world of children's music as a point of departure, warping it through the lens of Naked City-style jazz-rock. The reference point, naturally, would be Carl Stalling, if the Looney Tunes maestro had composed his pastiches not from Raymond Scott, classical music and the American songbook, but from The Boredoms, Ornette Coleman, Black Sabbath, Ennio Morricone, and, well, a severely disjointed internal monologue.

After the single-track death metal soundscape that was last year's Delirium Corda, the new CD is something of a return to form for Fantomas. It echoes their self-titled debut's M.O. of ultra-short songs with whiplash-inducing shifts in tempo. It also suffers in the same way that debut did, since songs averaging 30 seconds to a minute never have time to allow their ideas to develop. At times it resembles more a sketchbook of Patton's ideas than a full-fledged album, though the whole certainly adds up to more than a sum of its parts.

There are thirty tracks run through in just under 45 minutes, one for each day of April. The packaging, designed by artist Yoshimoto Nara, reportedly (my review copy is sans packaging) takes the form of a calendar, and the song titles are simply the days of the month. Patton's compositions are intricately devised, allowing the bad to interact with actual cartoon music and oh-so-familiar sound effects.

It goes without saying that the band is up to the material, with Buzzo veering from his trademark sludgy riffs (he even gets to bust out his vocals for a few seconds worth of pseudo-Melvins on "4/10/05 Sunday") to pizzicato horror-movie string plucks to Sonny Sharrock-like scrapes and squeals. Bassist Trevor Dunn proves as adept as ever at providing a heavy low end and plenty of atmospherics for his fellow ex-Bungle. And nobody could maintain the light-speed rhythmic shifts like Slayer's Dave Lombardo. Live, Patton and Lombardo position themselves on opposite ends of the stage, facing one another, and watching them lock eyes and launch into action is a thing of kinetic beauty.

One piece of advice, though: baby-proof the house before listening — whether there are children in the house or not.