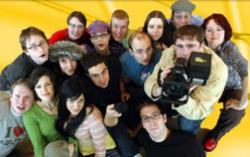 They're baaa-aaack: SNP returns to Pike Place and the Market Theatre for an all-new run, continuing in its auspicious quest to bridge the synaptic gap 'tween film, live theatre, and improv.

Based on a theme determined by audience suggestion, SNP shoots, scores, edits, and projects an improvised movie before your very eyes. The insta-flick that resulted from a recent Saturday night performance was named Melancholy Man, and involved three separate vignettes that kinda merged at the end:

I've said it before, and I've a feeling I'll say it again: this was my favorite SNP performance to date. It topped Sleep (from 2003's Fringe Fest run), Tide Me a Prince (from the February '04 show I attended), Googly Eyes (from last April), and even Skullcap (from October). Wow.

The consistently solid cast and the apprehension/anticipation of never knowing what you're gonna get are what make Neutrino such a joy to behold. I've been a fan for more than a year now, and SNP hasn't let me down yet; just being able to report that they still keep getting better is the sublimest of pleasures.