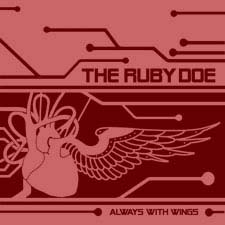 The Ruby Doe, hailing from Seattle and on local label Loveless Records, have just entered a new realm of their career: the 'great record' stage.

Always With Wings is the third release by this three-piece post-punk/rock outfit and it abounds with full-throttle guitar rock — jagged, raw and teeming with machismo. The thumping drums (Joshua Gabriel) and bass (Jesse Roberts), the sweet guitar licks (Aaron Ellh) and the shouty yet melodic gritty vocals (all three band members) will make fans of DC punk as well as catchy riffs happy. From start to finish, Always With Wings slugs out one sonic assault after the next. One could fuel an entire army for weeks on sh*# this heavy.

Not since Murder City Devils represented our fair city have we had such an accessible, loud, gut-punch rock band to call our own.

"Red Letters," a song that got airplay on some local stations when released as part of an EP of the same name, is a melodious yet rocking ditty in the guise of a three-minute pop song. "Entry Point Exit Wound" opens with a red-hot riff on repeat that pulses through the track into an anthemic chorus; when the keys come in to echo the lick, the song is all the more aurally pleasing. And the album’s title track is enormously epic — so much so that when I checked the time passed on my iPod, I was shocked to discover the track lasts only 4:30.

The production on Always With Wings is what will likely bring The Ruby Doe’s music to the masses; without the chorale of vocal tracks on "Black Spots," for example, the song wouldn't be as appealing across the board. But John Goodmanson (producer) and Kip Bellman (engineer), along with the band, balance just enough raw energy with polish to make Always With Wings possibly (hopefully) attractive to a larger audience. This is not to say the band has lost its punk cred. The album, despite its poppy tendencies, still packs enough explosion to rival a cord of M-80s.