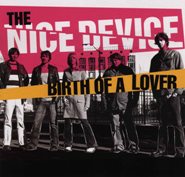 Birth of a Lover

In the wake of the Yeah Yeah Yeahs and Sahara Hotnights, powerful female vocalists are at the forefront of the music du jour. Alicia Gbur of The Nice Device fits in nicely with said company. With her smarmy vocals and sex appeal, the boys in her band had better be ready to take back seat, to play Jimmy Destri to her Deborah Harry.

Hailing from Detroit Rock City, the Nice Device recorded their Birth of a Lover EP with famed producer Jim Diamond, known for his work with the White Stripes and Von Bondies, among others.

On Birth of a Lover, the Nice Device chugs out seven kicking tunes in less than 20 minutes, a near-Ramones feat. Pick up a copy now and say "I told you so" to your friends when this promising band breaks through for mainstream attention.