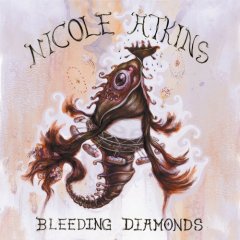 I dare you to listen to Bleeding Diamonds when you're feeling even slightly blue and not be moved, at once to tears and to hope. With a full-length debut on tap for later this year, Nicole Atkins and her band have whet many an appetite with this six-song EP full of multi-layered and gorgeously crafted songs.

The EP opens with the title track, which begins soft and precious and builds into booming complexity in which Atkins' voice sails along a layered tapestry of piano notes, guitar strums, strings and chimes. Chills ensue.

The song's build-up/fall-back dynamic ultimately subsides into a spooky harmony of OOOOHs before fading out. Track two is hardly as moody; "Snowshakes" may be, comparatively speaking, the album's pop song. A song about discontentment ("Sometimes the drugs don't keep you going"), it's catchy and lovely, with chimes at the end perhaps mimicking the rain in which Atkins is "drowning outside."

All over this album, in fact, the masterful instrumentation creates vivid imagery. The following track, "Carouselle," with jangly piano and guitar parts, indeed sounds like it could be a soundtrack to a carnival ride, perhaps with a sinister twist. Atkins credits David Lynch as a major influence, and one can easily imagine these songs playing behind the image of an ear in a field or a starlet succumbing to madness. On "War Torn," a sullen ballad with a booming chorus, Atkins curls her voice around her words to create a stirringly emotional experience for the listener. Were this indeed a Lynch film score, this is the song that would play while the hero came undone.

The song is followed by the tragic "Delora," which tells the story of a woman's sudden departure ("She's gone, she didn't leave a note") and the heartbreak that it causes. The song peaks with a series of ascending and descending notes struck on the piano in repetition. It is perhaps the most striking song on an EP full of striking songs. "Neptune City" closes the EP perfectly, a sobering song about Atkins' hometown in New Jersey ("I used to love it, used to be pretty") that quietly fades out, leaving behind a sense of sorrow.

Atkins' impressively strong and unfaltering voice is fresh and her deliveries are spot on, dragging when they should drag, crescendoing when they should crescendo, and full of vulnerable timbre but still powerful as fuck. The piano is the EP's other star, providing rich accompaniment and dramatic melodies that dance around the solid base the other instruments provide. The songs' passion and elegance is the kind that gives you goosebumps. Simply put, a stunning debut.