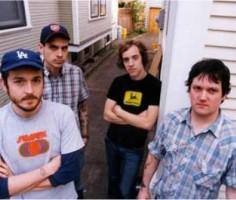 Modest Mouse at the Crystal Ballroom in PDX

Like Hunter S. Thompson and his attorney, my friend and I descended on Portland, Oregon to see Modest Mouse play live. Touring in support of their new album, We Were Dead Before the Ship Even Sank, Modest Mouse played two nights at McMenamin's Crystal Ballroom.

Sometimes you can’t rely on your friends.

On the drive to Portland, I tell him, "Don't let me drink too much, I have to write about this show." So what does he do? He matches me drink for drink in the hotel room before the show, then encourages me to order a cocktail with dinner, then, as he’s switched to water halfway through Modest Mouse's set (which I hadn't noticed), never told me, "Maybe you shouldn't order your fifth beer." And the beers come in 20-ounce cups at the Crystal Ballroom. So, needless to say, things were a little fuzzy toward the end.

At first I’m annoyed. I had warned him, I had asked him politely, to not let me do what I did. But then a thought pops in my beer-drenched brain. He’s right. But I shouldn't write about how drunk I got; rather, I should write about how all that beer was necessary to watch the show.

Now don’t take that statement the wrong way. Modest Mouse played a great show. In fact, it was a million times better than I’d expected. I’ve heard other people’s complaints from Modest Mouse shows in the past (boring; songs dragged on too long; the band wasn’t into it), but there’s no complaints from me about this show (thanks to the beer).

Love as Laughter provided great background music as we drank beers and smoked cigarettes in the lounge just downstairs from the Ballroom, where the show was piped in on speakers and a big-screen TV, waiting for the headliner.

When Modest Mouse hit the stage, the band seemed excited, even happy, to be up there. Isaac Brock’s confident posture and assault on the microphone was entertaining; His jerky back and forth dance incited impersonators. The crowd (which reportedly included Stephen Malkmus and Sleater Kinney) swayed back and forth in time with the gusto everyone onstage was putting into the songs.

The set began with a majority of songs from the new album and Good News for People Who Love Bad News. Since the new album wasn't released yet, I was familiar with only a couple of its songs. Rather than feeling lost due to the lack of new album familiarity, I felt privileged to have heard them live first. My excitement for the new album was stoked, and when I hear the songs on recorded for the first time, it will take me back to the energy in the air that night.

The music was fun, bouncy, "discoey" as my friend put it. And, unlike what I’m used to, Modest Mouse got the crowd dancing. Maybe it was the Portland crowd. Maybe it was because it had been awhile since we’ve been able to see the band play live; maybe it was because the night before there had (supposedly) been sound problems. The crowd in the Crystal Ballroom Thursday danced like they were at a Bee Gees show in 1978. I may have even danced a little myself (again, thank you beer).

When "Dashboard," the first single from We Were Dead… came on, I may have even danced enough to spill some of my (third) beer on my T-shirt. The dancing, screaming, and jumping had not even decelerated, an hour after the first note.

Keeping the energy alive, with the band blasting trumpets, changing guitars, and only a minimal amount of inaudible banter from Brock, Modest Mouse kept the songs clipping along, and the crowd moving. “Float On” caused the most ruckus, with the crowd causing the springs in the Crystal Ballroom’s floor to bounce so hard almost everyone’s beer was sloshed out onto our feet.

By my fifth beer, I'm now missing a couple of scenes, and as I’m sure Hunter S. Thompson had a few editors shaking their heads with disappointment, I may have some imaginary girls shaking their heads because I honestly don't recall the song the band ended with before leaving the stage.

And for that matter, the I didn't recognize the song they played as their encore. The band went into a long, slow jam, old Modest Mouse style, which (beer-soaked or not) got boring after the seventh or so minute of the tune. The band as a whole sounded great, though if it wasn’t for that last beer that kept my brain slowed down enough to enjoy a ten-minute-long jam, I might have left.

The band finished, and the crowd gave them heavy applause (as they deserve), then we headed around the corner to another bar for one more beer, glad we saw Modest Mouse play, glad we saw them in Portland, glad we saw them at the Crystal Ballroom. We anticipated the hangovers we'd have in the morning.