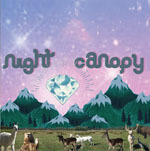 Of Honey and Country

"You've got a song you're singing from your gut, you want that audience to feel it in their gut. And you've got to make them think that you're one of them sitting out there with them too. They've got to be able to relate to what you're doing." Or so said the legendary Johnny Cash. Within country music, that idea should be universal (though when judging rock music, authenticity is about as necessary as some more fucking cowbell). When applying the "Cash Doctrine" (as I'm calling it), I'm willing to bet that the Man in Black would be a fan of Of Honey and Country, the debut album from Night Canopy — a terrific new country/folk band from Seattle.

Although it's difficult to walk more than two blocks in Seattle without accidentally tripping over a singer-songwriter, Blaschke stands out amongst her contemporaries because her voice shows both vulnerability and empathy. Her voice is similar to Neko Case's (turned down an octave or two) and her songwriting, like Case's, is both emotional and personal.

Take, for example, "Tell Me You've Been Lyin'," the album's fourth track. As Blaschke sings the same few lines over and over again, she sounds on the surface as if she's confronting a philandering boyfriend or husband; but on a deeper level, it sounds much more like she's singing to herself, knowing that her man is a no-good, lying bastard — but that she's also not sure she's ready to begin another phase of her life alone.

"Signs of Life" picks up where "Tell Me You've Been Lyin'" leaves off. In this song, Blaschke is picking up the pieces of a failed relationship, but is accepting her share of the blame: "…And I won't go there again / up until now you could have said / honey I think you lost it / and I would have had to agree". I don't know if the songs are autobiographical or not, but really, it's immaterial. There is unlikely to be anyone who would fail to identify with at least one of the twelve songs here.

Much like the classic Beach Boys album Pet Sounds, Of Honey and Country loosely follows the pattern of a relationship falling apart via the track sequencing, from optimism at the beginning of the disc through divorce. Of Honey does end with reconciliation, and Blaschke empathizes with every emotion in-between.

Of Honey and Country is a smart, deep, and satisfying record. It's a very impressive debut (although no one involved is exactly a stranger to a recording studio) from a band that I hope makes several more albums in the future.