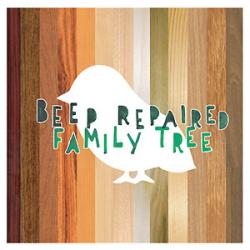 The "Family Tree" compilation is a schizophrenic journey through the roster of the Seattle label Beep Repaired. Containing 18 disjointed tracks that somehow fit together, the CD takes twists and turns like a long road trip where in the end your memories of the miles behind are hazy, but for some reason you look forward to turning around and doing it again backwards.

A few songs may be thrown on for the sake of a compilation, but none of the songs are throw-away.

There are a handful of songs by bands that seem to be pumping in the veins of the deceased (rest in peace) At the Drive-In, such as "Sclatica" by Free Jail, "Pretty Girls" By The Born Losers, and "Hotry" by Lake of Falcons. Throw in the mix you also find the surf-rock of Smile Brigade's "Dear John," and the trippy folk rock of "Crowning" by Correspondents.

Other stand-out tracks include the song, "Alcohol" by McGovern Goldwater Ticket. This pretty little ballad about nostalgia and self deprecation ("Everything goes wrong when I open my eyes") could have landed itself next to the Devotchka and Sufjan Stevens tunes on the Little Miss Sunshine soundtrack. The jerky drums and tingly guitars sound like a stretch of freeway in the summer in a yellow van you have to push-start.

The silly, blippy soul in Plenty Face's "Stuck to its Gunk" evokes both Beck (circa Midnight Vultures) and Prince (circa 1979). It's the kind of song that, if listened to on a middle-of-the-night stretch of dark highway where everyone takes turns driving and sleeping, you'd end up fearing alien abduction if you were to pull over to pee.

Commodore Duchess sings about the glossed-over neighborhoods south of L.A. on "Orange County" in a way that would make Joni Mitchell proud. Her shaky, sun-dripped voice pleads for a loved one to make a change by getting in the car and going north to where. "The girls don't wear mini-skirts all the time."

"And We Went in Love to the Circus" sounds like the Great Gift Idea could be the adopted little brother of the Shins (babysat a few times by Modest Mouse) with a toe-tapping, finger-snapping song about, what else, change and the open road. The lyric, "Pack a suitcase, turn the engine on, take the interstate, drive away from here," makes you want to do just that, even with the uncertainty of where it will take you.

Not every song on this compilation fall in the same genre, and not every song has the same kind of sound, which leads to an inevitable truth: You won't like all of it; you may like most of it, you may hate most of it. But what we have here is a journey, and not every journey is a smooth ride. There are tight turns, bumpy roads, and every once in a while, a flat tire. But it's when we get to our final destination, relieved we've made it, we seem to always look forward to the backwards trip home.