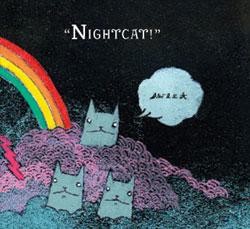 Eric Lindley makes delicate rainy day acoustic music that recalls Red House Painters, Doveman, and Slowreader, among others. "Nightcat!" is a pleasant album propelled by Lindley’s wounded-butterfly-quaver of a voice and some meticulously wrought melodies. Lindley sounds utterly defeated throughout the album though he manages to temper all the bleakness and dejection with subtle little ambushes of humor that are quite refreshing.

The first three tracks of the album are particularly strong. “Exception/Sensitive” begins with a chilly synth chord and then darts into an airy hook that features a perfectly executed vocal effect on Lindley’s voice that makes him sound like some sort of ultra sensitive robot. This track, as well as a couple of others on the album, hints at French electro-pop and I’d love to see Lindley float away in this direction on later releases. “Saturday” is another example of everything Lindley is doing right. Its quietly morbid lyrics are matched with a slightly obtuse chord progression that is reminiscent of The Bends-era Radiohead. “Bounce” lulls you into a melancholy mood like a night train through farmland with its gentle vocal phrasing and softly driving drumbeat.

By the time you reach “Bad,” the album's seventh track, the music begins to blend together and become sluggish. Lindley must have realized this, as the last third of the record contains the some more energetic moments. On “Country” he complains bitterly, “Everybody wanna raise my taxes / fuckers wanna starve my kids now / gotta pay for three cars / and uniformed school.” His anger is ill-fitting and forced, like a young teenager trying on his older brother’s hip jacket and admiring himself in the mirror. He’s right though; the album does need a shot of energy. But violence is not the answer, at least not such overt anger. You must leave Los Angeles, young padawan. Come to the Northwest where you shall learn the ancient art of being passive aggressive.

Maybe he was afraid to populate an album with nothing but tender, sensitive moments, and hence the ! in the lighthearted title that doesn’t really reflect the music or add much meaning? That’s an understandable fear but a misplaced one: Lindley is at his best when he let’s his guard down.