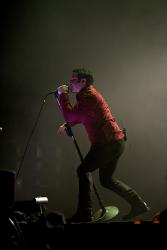 Going into this Nine Inch Nails show at the Key Arena on Saturday, I must admit, I was a little unsure of how much I would dig it. I knew that I was stoked beyond belief to be photographing this infamous band (or should I say man?), and that the light show was going to be unlike anything I'd ever seen. I also knew that the mosh pit was going to be insane, and I needed to stay away from it. I knew that Trent Reznor is sober, healthy, "happy," and putting on independently-funded shows that no one else in the world can come close to.

As a rabid fan of indie rock for the past ten plus years, it's not often that I go to huge arena rock shows anymore. I equate stadium shows with this image I still have engrained in my head of seeing the Smashing Pumpkins at the Bradley Center in Milwaukee when I was 14, and some the huge Pearl Jam shows I've frequented over the years: Unbelievably large gatherings of people (many sporting t-shirts of the band playing that very evening), strobe lights, and buried vocals in the mix.

My past experiences with the Key Arena to this point had only been seeing Death Cab for Cutie play there after Plans had truly exploded, and the Police reunion show last year. During DCfC, I spent most of the show in shock over the teenagers bouncing the LCD screens of their cell phones along to the beat of "Crooked Teeth," and marvelling in disbelief that this little band I'd seen so many times had suddenly become this huge. Seeing the Police there left me nearly bored to tears and grossed out when I heard their reworked hit songs. My boyfriend and I actually left halfway through the set so we could drive home listening to old Police live albums.

This time was completely different. Trent Reznor is truly a unique artist that has stayed true to his own personal vision of what Nine Inch Nails is, and what a live music experience should be. They are a huge band, with a hugely devoted fan base. The line of people picking up their will-call tickets from the NIN.COM preorder window was seemingly endless. The vast majority of people on the floor of the Key Arena were fan club members — gaining exclusive entrance to the show with personalized (and beautifully printed) tickets. So cool. Perfect for framing. There's nothing I love more than saving ticket stubs, VIP or Photo Pass stickers, little remants of big nights; and I was super jealous when a fellow photographer showed me his ticket with his full name etched into it.

We photographers were told only a few rules: we were only allowed to shoot the second, third and fourth songs, and if the security decided that the crowd was too crazy or that we were in the way, we were done. No questions asked. We were told that the fourth song would be "March of the Pigs," and I had a sneaking suspicion we wouldn't be shooting the whole way through.

I was right. The crowd was so rabid and intense, there were bodies flying out of the undulating mass of people from the moment Trent and company entered the stage. I had adrenaline pumping through my body as I tried to be aware of the photographers surrounding me, the security guys EVERYWHERE, the audience screaming, singing, and gasping for air all around me, and …oh yeah, TRENT REZNOR THREE FEET FROM MY FACE. Jesus.

I can't possibly describe the "light show" — I'm using that term loosely to describe something that is unlike anything else. It was so much more than a light show, it was an environment created to match each song. More than that, to match each instrument, or even each variance in tone, pitch, tempo. Check out this YouTube video of "Only," and I think you'll understand. The see-through light screen that NIN's used for years has been reinvented. Especially during this song, it was as though the lights were touch-sensitive, or heat-sensitive.. or something… you couldn't quite place your finger on it. I have no idea how it works, and I don't want to know. I'm sure it was very expensive, and dammit, it makes a $70 ticket worth the price.

You see, Trent Reznor doesn't have his record label footing the bill for these extravagent stage set-ups and fan perks. He IS his record label. He knows how to treat his fans, and he knows how to entertain. This show was a far cry from the indie rock bands I'm used to seeing — a few dudes on a stage within reach with some crappy-to-decent lighting coming from the venue. Of course, I still love those shows with those indie bands I know and love, but now I think I love this kind of indie rock just as much.