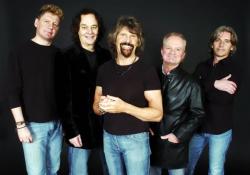 The Zombies – Bringing Back Psychedelia

One of my fondest, and earliest, memories as a child was sitting with my Dad and listening to classic rock together on our old console stereo. I got my rock 'n roll education during those days listening to Black Sabbath, ZZ Top, Chicago and Cream. I developed an early obsession with the Beach Boys and even if I didn't know the names of all the bands that my parents listened to, I sure knew the words.

So when I heard the Zombies were back together and would be performing at El Corazon I had to go. The show was surreal and nostalgic for me. I had a "Am I really here seeing 60's melody masters the Zombies at a grungy club rocking out like the last forty years didn't matter?" moment.

While I didn't have high expectations for the performance (it was probably the intention of my sub-conscious mind to behave this way), I had my low expectation thrown back in my face and replaced by a perfectly played performance by psych-pop greats, the Zombies, on Thursday night.

Headed by original Zombies band mates Colin Blunstone and Rod Argent, the five-piece that must be well into their seventies took the stage at El Corazon amidst a cheering crowd. There was no doubt that this was a band from the sixties. Their sound, classic R&B-tinged British rock spaced with jazzy interludes, has influenced the likes of The Byrds and The Kinks.

Rod Argent's hair was miraculously buoyant, becoming airborne during his emotional keys solos and bass player JimRodford played a neck-less bass, with a pick. During the show it was hard not to recall those late night infomercials selling classic rock on 10cd sets, guitars ablaze and hair feathered, but despite the chintzy sensation of it all it was impossible to deny how they sounded. From "I Love You" all the way to the four song encore the Zombies laid down flawless psychedelic pop. ColinBlunstone, looking incredibly perma-stoned, belted out thirteen or fourteen songs with visible ease. "What Becomes of the Broken Hearted" and "Time Out of Season" were crowd-pleasers as expected, but the real surprise was how impeccable they sounded. Blunstone's voice was mesmerizing and the palpable energy of the whole band transferred into the audience, and vice versa.

Opening for the Zombies was local folk-popper Jon Auer. Auer was co-founder of the Posies and a former Big Star member. I regret having missed most of his performance last night. I like the Posies and have always enjoyed Big Star but I didn't know what to expect when I saw that he would be the second opener for the Zombies. I wasn't prepared to be stunned by his warm voice and masterful guitar playing. I didn't realize he would be SO good.

Auer played pop music unfettered with "tweeness" or gimmick. His approach was soulful and lush, punctuated by energetic spark and highly polished guitar skills. After two PBRs and a glorious shot of Maker's Mark I caught the last two or three songs of Jon's performance. His songs are about contrast: from swelling exuberance to crashing mortality. The transition between those elements was performed with utter grace, straight from within. His last song was a blistering and memorable mash of "Don't Fear the Reaper," "All Along the Watchtower," "California Dreamin'" and "Stairway to Heaven".

I think the Zombies were stunned by the audience's reaction and how well they were being received, and I believe I saw Blunstone wipe a tear from his eye during a particularly long round of post-song clapping. El Corazon wasn't packed to the gills, but the audience that was there was downright ecstatic to see the Zombies, and was rapt with Jon Auer's performance as well. It was an odd and very gratifying experience to be there with people from all walks and ages of life, coming together in support and love of an old favorite. I can't say I found a flaw in the Zombies performance. They were just downright amazing.