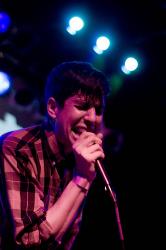 My friend and I arrived just in time to catch the last minute of the last song of the Feral Children’s set; the intensity was so thick in the air, I could have cut it with a knife. The moment I saw x unidentified man thrashing about onstage beating a conga, I knew I had missed out. C’est la vie.

No-Fi Soul Rebellion were amazing, no surprise there. They put on one of the funnest sets around town, as I’m sure everyone in the audience that night would have agreed. Mark Heimer, getting down with his usual crazy self, pranced and danced through the audience as wife Andrea pitched camp in the center of the circle the audience had provided for them to work some dangerously mesmerizing magic.

I had heard a lot about Yacht before Saturday night and was completely blown away by the duo. Claire Evans and Jona Bechtolt’s onstage chemistry was undeniable. Complete with an iChat session with a fellow PDX’er and Windows horror story (“Get a mac!”), Yacht brought it all. About 3/4 of the way through their set, Yacht debuted their new music video for a song whose name escapes me at the moment. I can, however, tell you that the video was a visual party for the eyes.

I saw Matt and Kim with the French Kicks the very first time they played Seattle years ago. I saw them again at Capitol Hill Block Party last year and Saturday night for the third time. With the energy of a violently shaken coke, the precious twosome pop-rocked the main floor taking the crowd through favorites like “Yea Yeah” and “It’s a Fact.” Kim’s raucous drumming and triumphant “hmph!” at the end of every song coupled with Matt’s hilarious banter (one story concerning somnambulist issues he has every time he drinks Pabst Blue Ribbon) and insanely infectious keyboard lines made for another madly impressive live show on their part.

I fall in love with their love every time I see them live.