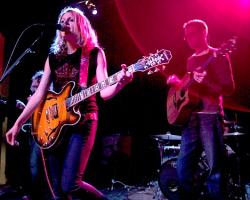 I'm not going to rely on hyperbole to explain how fun Friday's Noise for the Needy benefit show at King Cobra was. It had been a crazy week, and it seemed like more than a coincidence that it was Friday the 13th. The show was just the elixir I needed to set things right.

New Faces, fresh from their EMP Sound Off 2008 win, put the audience under their spell. The Port Townsend trio was a wily bunch that mixed the richness of Interpol and the catchy rifts of Franz Ferdinand.

Kate Tucker & the Sons of Sweden were up next, and this is when the 'elixir' part of the evening took hold and things went up a notch. By the time my beloved BOAT came on, things were in high gear. Like a good imaginary girl, I had a notebook in hand and had every intention of taking notes about how tight they were and seamless their set was. I was going to namecheck the old and new songs they played and list off the ordering info for their brand new extremely limited 7" record (out on Magic Marker Records). But alas, a girl only has so many hands, and mine was holding a PBR (thanks Noise for the Needy sponsors!).

I was, ahem, over the moon elated with the Math and Physics Club set. They played their signature sweet, humble pop songs and even included my favorite of their covers, "Shaking Through" by REM. Bass player Ethan proved himself to be superstar of the group pulling off a better (and dare I say cuter and more stylish) Mike Mills than Mike himself.

I'm not exactly sure why, but by the time the 'secret' headliner (The Lashes) took the stage, my night had come to a close.

As my friend Lily Allen eloquently said, "Kids, drink responsibly or you'll end up looking like this, not pretty! Was quite fun though, from what I can remember."