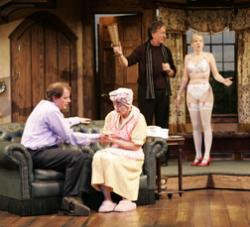 A motley troupe of has-been and never-were actors dress-rehearse, tour in, and ultimately obliterate a hilariously idiotic British sex farce called Nothing On in the long-adored farce-within-a-farce Noises Off, currently staged in a rollicking new Seattle Rep production. It's not my favorite show of the Rep's so-far stellar season, but its outlandish physical-comedy wonders are refreshingly free of arbitrary holiday cheer.

The opening night audience laughed a whole lot more than I did at Act I, which consists of a not-quite-disastrous rehearsal for the first act of Nothing On: the fictional farce's director (Mark Chamberlin) actually sits in the audience, unseen for the first half-hour or so, barking commands and bellyaches to the 'actors' onstage. Those 'performers' include a ditzy blonde (Bhama Roget, fantastic with her hilarious over-exaggerated 'acting'), a flustered seasoned stage vet (Lori Larsen), a rather daft older actor prone to drink (always fun-to-watch Clayton Corzatte), and a busybody meddler (local favorite Suzanne Bouchard), among others. As much as I hate to admit it, come intermission I was looking forward to Act II … of Nothing On!

But Act II of Noises Off begins with a backstage glimpse at a later production of Nothing On, and we watch the first act all over again, but this time from behind the façade. (Still with me? Good.) It's full of ribald Britcom hysteria, with lots of juvenile-naughty physicality and comic misunderstanding; I imagine the experience of witnessing it to be not unlike attending a live taping of Fawlty Towers or 'Allo 'Allo back in the day. Eventually we see the whole process again from the viewpoint of an unfortunate Stockton-On-Tees Municipal Theatre audience even later in the tour… but by that time the cast and crew's squabbles and frayed edges have rendered poor Nothing On an incoherent, out-of-control mess.

Eventually you wonder why the 'actors' don't just pack it in and head down t' the pub. But you're glad they don't, and the applause-inducing choreography of their theatrical misdeeds almost makes you forget that you'll never know what ridiculous joys Act II of Nothing On had in store.