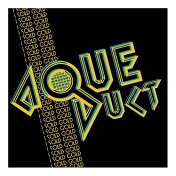 You may have known David Terry in the eighth grade. He may have had a crush on you, too, but you'd never know it. He was at the roller rink, hands deep in his pockets stuffed full of quarters to play Donkey Kong. While you ate soggy pizza squares from the snack bar with your friends, he requested Guns N' Roses "Patience" from the DJ. But when the song was played, he waited for you to couples skate with someone else — half out of shyness, and half out of knowing that being the odd man out had the potential to give him fodder for writing songs like the 11 beauties that comprise the album I Sold Gold. The subtitle for this debut full-length release by Aqueduct may as well be the track "Gameover: Thanks for Playing". David Terry even records alone, as Aqueduct.

I Sold Gold is pure pop and full of catchy harmonies and smart, self-conscious lyrics. Drum machines, keyboard, and angst create a playful soundtrack for rejection. The song "Growing up with GNR" is David Terry's homage to the 1980's. You can hear the ghost of Atari and Casiotone in the juvenile synth beats throughout the album, but they are instantly matured by swirls of skilled piano. The wheeling harmonies hold up Terry's endearingly off-key voice — though at times you may find his voice more off-key than endearing. But our boy Terry's not one to put on airs. As he sings in "Laundry Baskets": "To anyone who likes this song/there's probably ten who hate it."

"Five Star Day" is the shining gem of the album, the self-sorry drama queen's anthem. Cartwheeling piano and harp dance to a thudding bass drum. Your heart might squish a little bit on hearing the innocence of the lyrics: "I don't believe in astrology but you can read my horoscope / I like to hear your voice."

From the irresistible harmonies of the opening overture "The Suggestion Box", to the infectious closing credits of "The Tulsa Trap", this is a festive soundtrack to a lonely boy's pity party. And it feels so good to feel this bad.