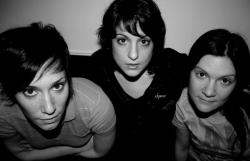 Northern State, The Trucks, and Team Gina at Chop Suey

As long as I’ve been going to shows and being a music fan, I’ve been a Northern State fan. When their debut EP Dying In Stereo was released, I listened to it repeatedly and incessantly. I was starting to write for a feminist rock magazine and at that point I liked (and still do) their love of hip hop and how it didn’t include any of the braggadocio or misogyny that is often too common.

Where their Dying In Stereo album was a quite an unexpected gem, their major label debut All City was a disappointment overall and they had fallen off my radar until last year at SXSW when I was able to catch Hesta Prynn, Spero and Sprout for a short, 20 minute set during one of the day parties. Since then I’ve been anxious to catch a full-length set and finally had that opportunity Monday night at Chop Suey.

First on the bill was Team Gina, Northern State’s most obvious intellectual descendents. Like NS, Ginas Genius and Bling are intelligent, liberal white girls who love hip hop but are comfortable carving out their own niche. Rather than worrying about keeping up with Nas or Lil Wayne, the Ginas laugh off the critics who point out their delivery isn’t the greatest (on “A Tribe Called Rocco” they say they aren’t trying to be anything they’re not “except rappers.”) Outspoken, overtly lesbian and always very funny, Team Gina is one of the most fun bands to see live. They wear identical outfits and their rhymes drop both high and lowbrow pop cultural references like famous photographer Herb Ritts or Jem and the Holograms. Lately I’ve been hooked on their first album Gina Gina Revolution but am really anxious to hear their reportedly forthcoming LP.

They played for about 25 minutes are their set was the highlight of the evening. Maybe because it was so short it felt focused or because it was the least awkward. Either way, it was great to hear some of my favorites like “A Tribe Called Rocco” and “Deez Nuts” as well as “Wife Swapping”, which I’m dying to hear on my iPod over and over again but it sounded hilarious on stage.

The Trucks followed and started off well. They were fun and funny, playing the simple, fun poppy songs from their self-titled album. One guy in the crowd kept shouting “Let’s get naked” over and over again and The Trucks’ Kristin Allen-Zito brushed him off by saying “this guy wants to get naked and if anyone wants you join him, you can find him at the Cuff after the show.” It was a great moment for Allen-Zito and the band because when your songs are hyper-sexual (as the Trucks’ most certainly are), you’ll have to accept that that’s going to be the typical crowd reaction a lot of the time. Most of the crowd was into the show and seemed to be having a fun time. Until, after about 25 minutes into the set they asked the sound guy how they were doing on time and he said they had 30 minutes left.

That was the turning point of the night. I don’t expect that the Trucks expected to be playing for just under an hour and they weren’t prepared for it. Maybe it was because Team Gina used up only 25 of their allotted 45 minutes on stage and they started 10 minutes early but they gave it their best effort. They played all of their crowd favorites like “Zombie”, “Shattered” and “Titties” and the crowd (probably about 2/3s of Chop Suey was filled for their set on a Monday night) sang along and danced. Dragging out the set, which is what they appeared to be doing, was awkward. When they finally ended by playing “Big Afros” they looked exhausted and relieved to have survived the set. When I saw the Trucks at Bumbershoot they killed; here they killed time.

Northern State came out, finally after half an hour, to finish the night off and their set was pretty enjoyable. They were also unprepared because they didn’t prepare a setlist (and they started about 15 minutes later than the time posted so it wasn’t as though there wasn’t time) so there were lots of awkward pauses between songs but the delivery was still smooth and seamless. Late on a Monday night, they still had Chop Suey about half full and those who stayed had to have enjoyed their set. Northern State delivered a solid set of politically-aware hip hop. They are white girls who rap, so the obvious (and hardly unfair) comparison is to the Beastie Boys (and was solidified when the King Adrock produced two songs on Northern State’s 2007 album Can I Keep This Pen?: “Sucka Mofo” and “Oooh Girl”).

They played for an hour and their set spanned songs from Dying In Stereo to their current LP – but almost exclusively from Can I Keep This Pen?. The ladies of NS said repeatedly that they love playing in Seattle because we’re some of “the craziest motherfuckers” they’ve ever seen. They closed the set (before the encore) with “Sucka Mofo”, my favorite recent NS song – and ditched the unfortunate bridge of the recorded version, so the song sounded better than I’ve heard it before. Overall, the show was fun, if a little disorganized but I still couldn’t think of any other way I’d rather spend a Monday night.