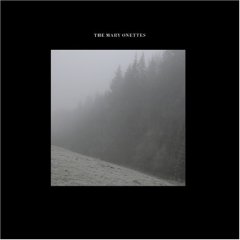 The Mary Onettes should find Doc Brown and go back to 1985.

On their Myspace page, they proudly list “mostly songs from the eighties” as their only influences.  But the distinction that should be made for The Mary Onettes is that it doesn’t even sound like they’re copying any of the old bands.  It sounds like they could literally pass as one of them – in the best way possible.  The band creates an atmosphere with none of the pompous quality of the Killers or the “let’s play dance music that sounds like the 80s but is still so indie” sentiment of bands like the Bravery.

The album’s standout track is “Lost,” which sounds like what would’ve happened had Joy Division gotten together over a drink and decided to give it another go.  The 30-second guitar and synth intro is enough to make you think you should be in some darkly lit Manchester nightclub, wearing all black and dancing the night away.  The ending is almost cathartic as singer Phillip Ekstrom repeats “when all you do is wrong/when all you feel is wrong/if I could dream away” and the band launches into unrestrained post-punk territory.

From the get-go, this album makes me nostalgic for a time in music that I’m too young to even be able to remember.  It bounces along with all the shimmering synths and reverb-heavy electric guitars and snare drum hits that recall New Order or the Cure – but wait, it’s 2008, and wasn’t that New Wave/dance revival over already?  Apparently not… and maybe that’s a good thing.