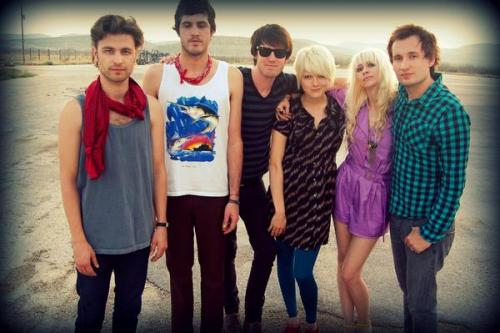 One of the things I love about being part of the TIG family, however long-distance, is that I get to peek into a scene I wouldn't normally be exposed to living down here in LA. But I often forget that it's a 2-way road, and there are plenty of LA bands that Northwest folks might not know about who are pretty awesome in their own right.

I started following Castledoor in late 2007, and they impressed me back then, but now they just blow me away — both on record and at shows. Their first full-length album Shouting At Mountains (produced by Robert Schwartzmann, no less) finally dropped this past April, and I can't believe they're still unsigned. They know how to write a hook, they're not afraid to show their love for blues and soul, and even though they're definitely poppy they don't stick to formula. And they're damn stylish.

If you live in LA, I recommend you get down to Spaceland sometime this month, where Castledoor is in residence every Monday night (including tonight!) — rumor has it they'll have Local Natives with them at the June 22 show, so that'd be a perfect time to go. And even if you don't live in LA, check them out anyway on Myspace, and live vicariously through this video of "Dumpster Diving":