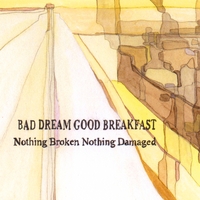 Nothing Broken, Nothing Damaged

The first time I popped Bad Dream, Good Breakfast's debut full-length Nothing Broken, Nothing Damaged into my CD player and let it spin, I was and impressed, amused, and intrigued — but not satisfied. As I continued to listen to it over and over and over (as reviewers tend to do), it began to grow on me, but I couldn't help but look back on that first listen and debate whether I liked it because it was good or because it was becoming familiar. What was missing? What was broken? What was damaged? I couldn't get that bad dream of my first listen out of my head, no matter how much I enjoyed breakfast the next morning.

All right, I've got all of the lousy band/CD name metaphors out of my system (you must understand, they are so pun-able — I couldn't resist). As I continued to listen, it dawned on me that practically the entire CD felt like one giant decrescendo. Was that what bugged me? I am a sucker for rising action, after all.

Bad Dream, Good Breakfast are comprised of two elements. The first is your standard rock band (guitar, bass, drums, keys), and the second is an ensemble orchestra complete with a cellist, violist, and a couple violinists. The first element usually takes priority over the second, sometimes even to the point that it elicits the reaction, "Hey, is the string section part of the band or what?" Then again, there are great moments when the two elements compliment each other perfectly, collaborating toward a common expressive goal. With such an arrangement, it is to be expected that this band would go through a phase of uncertainty, experimentation, bull's eye hits, and critical misses while they feel their way toward some sort of self-identity. Nothing Broken, Nothing Damaged delivers just that.

The CD begins with "A Ghost That Couldn't Let Go," which describes the posthumous jealousy of a spirit who has come back to find that his former love has found somebody new. The captivating storyline swirls between soft guitars and heartbeat rhythms (though little trace yet of orchestral contributions) before crashing into a passionate plateau of sound, topped with the words, "I'll chill your skin, I'll break your limbs if you even go near her lips / In one glare, I will make you wish you lived six feet below like me." The second track, "The Urgency Of Nightlife And The Temptations That Come Of It," formally introduces us to the orchestra section in the form of an indie-pop tango — and yes, it's as fun as it sounds. Vocalist Nick Jones leads the song with an allure similar to what Jack Skellington would sound like if he had found the door to Moulin Rouge instead of Christmas Town. It's a sexy, piquant, and elegant ballad to the urgency of nightlife and, well, you know. There are innuendos aplenty too, from the not-so-subtle "I feel the urgency of nightlife in your trembling thighs" to the coquettish line that follows: "You are a velvet skyline / ooh la ooh la la / divine." It's a strong start, and a very bold one. The sort of start that demands a payoff.

Unfortunately, that payoff never quite comes. After the one-two punch of the first two tracks, the rest of the CD seems rather uninspired, or to be more specific, too introverted. It doesn't happen all at once — the third track, "Kiss The Ground," poignantly and beautifully expresses the appreciation for life that the prospect of death can bring — but there is a noticeable downward slope in energy and originality. The subject matter eventually reverts to default songwriter material (i.e. generic feelings of discontent, longing for lost romances, existential angst, etc., etc., etc….) and though Jones manages to convey it all with a distinguished poetic voice, it doesn't have the pizazz promised by the teaser tracks. The music follows in lockstep, slipping into a rut of instrumental molasses that it manages to climb out of only during moments when all the parts agree to work together again. This band is at their best when they convey their messages and feelings through the tales of storybook songs rather than literal manifestations of emotion. It serves the poetry of the lyrics better, it gives the orchestra a story to illustrate, and Jones just has a knack for it.

Bad Dream, Good Breakfast are still tiptoeing cautiously as they explore their sound, and I think it would serve them better to go full steam ahead and take more creative risks. As this record progressed, I continually felt as if they were attempting to "find their sound," as many young bands do, but I think that it would be a mistake for a band with so many artistic possibilities to restrict themselves to what they feel is most comfortable. The best thing they can do right now is to expand their limitations, explore extremes, and carve their musical niche as large as possible so that they can have plenty of free space to work with. Nothing Broken, Nothing Damaged is a big first step in a very interesting direction. It's an impressive start for a band that's still trying to figure itself out. The sort of start that demands a payoff…