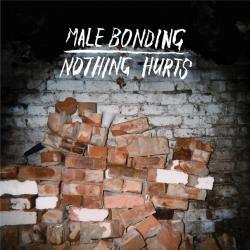 For fans of their split 7 ” with the Dum Dum Girls (track “Before It’s Gone” not included here), Dalston, Great Britain-spawned three piece Male Bonding share their musical camaraderie on their Sub Pop debut. Nothing Hurts doesn’t sound like it at all, as romantic torture is the content within the form, but that has been the basis of the blues and its derived forms in bands even less Buzzcocky.

John Arthur Webb, Kevin Hendrick, and Robin Silas Christian are creating fitful new heavy punky pop that yes, has that triangle in the back cover art, and of course, the trio would look simply smashing snogging with the Vivian Girls. But does it (prepare the rubbish for flinging at your reviewer) “rock”? Yes, yes, it does. “Your Contact” has a slowing-speeding bass-line as gizzard-poking as anything by Dead Moon, and “Franklin” has ruminations set to a back-beat you can slap on your best friend’s back to near the front of the stage. Loss of innocence is tracked from “All Things This Way” to “Nothing Used To Hurt.” No Age and Red Sparowes mixer and mastering fellow Pete Lyman helps raise the song-forms above the caterwaul without truncating the kick from the amphetamine minds behind it.

Dalston has had a fervent indie scene among its flat parties and immigrant culture for awhile, and it was a matter of time before one of these particular gnarly neighborhood snollygosters snared a United States release. The album comes out this Tuesday, May 11 in the States, and if you’re tired of punk either too testosterone-infused (screaming brainless hardcore) or too effete to care about (I’m not naming names), Male Bonding offer a first full length with universal rock appeal beneath the buzz.