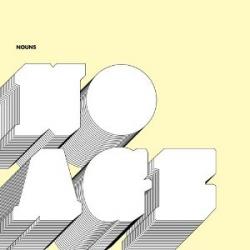 As a designer (sort of) and an appreciator of exceptional design, the first thing I noticed about this No Age album was the packaging. Inside the cardboard folding cover is an attached booklet of photos, one taken of a club stage area barren without sweaty kids or fluids on the floor yet. One was taken of Dean Spunt and Randy Randall with markered words completely covering their faces and necks, one of a pretty great cassette tape collection. The fascinating photos, along with the stellar package design turns this release into physical art, right in front of us. And that's exactly what No Age aims for: an art-is-life aesthetic bent on bringing people together.

Nouns is simple in name, and in a way, simple in execution. It's all distortion, guitars, tambourine and thumping bass, slinking around fuzzily and then crashing into murky noise. Their involvement in avant-punk vegan DIY club The Smell (along with the likes of Abe Vigoda and HEALTH) really has an impact on No Age's sound, I think. All of their recordings emanate a sense of enthusiasm and genuine thriving, in the music itself and in a reflection of the way that the music scene is changing and growing in the hands of artists like No Age. They're a homemade, hurtling, riff-driven art-rock guitar band in overdrive.

Standout "Teen Creeps" exhibits drumming in the true No Age style: sloppy, ringing and haphazard. It's awash with lo-fi guitars and muted vocals, not afraid to get down and dirty. "Things I Did When I Was Dead" turns the tables on "Teen Creeps" though, emitting creepy and downtempo balladry usually mastered by less robust rockers. It's good enough, but lacks the grit and gumption that the rest of the record exhibits so strongly.

Nouns sounds more streamlined than Weirdo Rippers and it is definitely less of an ambient sound scape and more of a crusty, but profound, punk rock. It's simultaneously more accessible while being more complex, and in turn is more intriguing.

Like the Thermals, Sonic Youth and maybe Lightning Bolt, No Age is best at high volume where you can almost see the distortion reeling right at your face. The indistinguishable vocals only magnify the charm, the simple two chord/one melody thrashing only make it more satisfying to the ears. Nouns is hard and scratchy and in your face, but still achieves beauty and a catchiness that you can almost sing along to. The seemingly ramshackle result is the opposite of what I hear from most band's records, but No Age's style just reiterates where they come from, and certainly where they plan to go.