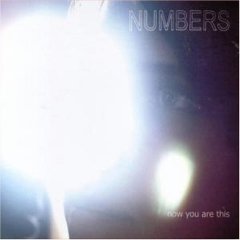 Now You Are This

Mary for Certain February 7, 2008 no Comments

The first time I listened to this album I couldn't get through it, succumbing to the notion that the first song set the tone and atmosphere for the entire collection. I am glad I came back to Numbers' Now You Are This. Within this album lie some seemingly simple gems, and some monotony.

The first thing I want to do upon hearing the first song is listen to Unrest. Not that Numbers sounds like Unrest but rather there's one particular tone on "New Life" that jogs my brain in that direction. The first half of the album isn't bad, but I find myself looking down at the tracklisting wondering how long a particular song has been playing, as the first couple of songs blend together for me. To find the meat, the joy of Now You Are This, fast forward to the second half of the album. Start with "I Ripped My Own Heart Out," an instrumental that perhaps says more than any other song on the album. The dirge-like nature of the organ seems to suggest alienation and plodding and yet isn't completely depressing. Imagine a happy sadness if you will. Check out "The Mapping of E8," which starts off with a catchy pop beat and a fun synth, mellows into guitar minimalism, and then builds up into a low grinding energy. "Liela Mila" introduces a sweet sounding piano song after two minutes of unadulterated fuzz.

Indra Dunis takes full vocal command on this album, with harmonies from the guys (Eric Landmark and Dave Broekema) that on occasion remind me of a less pop-laden early B-52s sound. The most annoying part of the album is not always being able to hear the vocals clearly.

Numbers has morphed from their loud, crashy, bellowing albums with Tigerbeat Records to more minimal synth-heavy thoughtfulness with Now You Are This, their second album with Kill Rock Stars. While the sound works at times, it felt like the band didn't find themselves until halfway through Now You Are This. I'm just glad I took a second listen and made it to the good stuff.