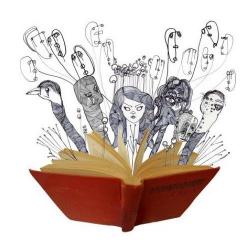 I suppose any conversation about Future of the Left has to start with Mclusky, because if you don’t think of the late Welsh band when you here Curses!, then either you never heard Mclusky or someone switched the disc on you. Heck, Future of the Left is made of former members of Mclusky, so pretty much they’re the same band except for a name change, which is too bad because Mclusky is a good name. “Future of the Left” sounds like the name of an evening lecture by well-meaning upper middle class yuppies about whether people should like Hillary or Barack better and what we think of tax cuts. Instead, you get kicked in the face with rock, which, in general, is not likely to happen at your average Moveon gathering.

Future of the Left is actually a fusion of the aforementioned Mclusky and fellow Welsh post-punk band Jawcrew — Andrew Falkous and Jack Egglestone (from Mclusky) joined with Jawcrew’s Kelson Mathias. What we get is pretty much the same angular, aggressive punk descended from Fugazi that Mclusky offered, right down to Falkous’s frenetic vocals dominating the songs. Curses! almost feels like the progression from Mclusky’s underappreciated The Difference Between Me and You is That I’m Not on Fire. Things are still caustic, antagonistic and amusing; heck, how else can you describe a band that writes songs with choruses like ”Colin is a pussy / a very pretty pussy” (“Manchasm”) and has the spine to name a song “Real Men Hunt in Packs”?

The album starts itself off like a car wreck, grinding and gnashing its way down the road in slow motion, without any real melody as such, but more of a sonic statement that noise is good. “The Lord Hates a Coward” is your bread-and-butter Future of the Left, with howling vocals, screeching guitars and slogans like ”Violence … solves … everything.” It never takes off like insta-classics such as “Alan Was a Cowboy Killer,” but still it rocks. “Plague of Onces” keeps on in that direction, coming across like a plague of bees forming a band (or possibly the music for a pilot episode of Rage Against the Machine Babies). You can get your post-punk crush going with “Wrigley Scott,” a song that tells us about sausage on a stick and generally thrashing around in delight.

As with Mclusky, the quality of songs by Future of the Left is highly variable. Sometimes, the band hits it on all cylinders, while other songs just sort of limp along like a wounded wolf (“Fingers Become Thumbs!” and “Fuck the Countryside Alliance” come to mind). This is counterbalanced by gems like “Suddenly, It’s a Folk Song,” a downright catchy pop song (minus the snarling guitars) or “Small Bones, Small Bodies,” a track that might feel at home snuggled up with Mike Patton. “Real Men Hunt in Packs” is as badass as the track name implies, featuring growling guitars and piano (?), like the punk rock cousin of George Thorogood, and “Team:Seed” is one of those perfect ~1-minute-long gems that Mclusky had mastered. Of course, I have no idea what to do with the closing ballad (yes, ballad), “The Contrarian,” but a better title for it could not exist.

As was with Mclusky, Future of the Left’s Curses! takes a few listens to really grow on you, which isn't surprising considering the visceral nature of the band. However, they disguise their musical acumen in the noise that wraps up their songs. There are some departures from the original Mclusky gameplan, but if you were sad that Mclusky went the way of the dinosaur, then stroll down to your local record shop and pick up Mclusky 2.0 in the form of Future of the Left.