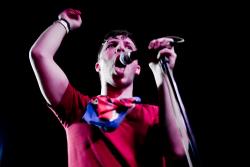 NPSH, Copy, and New Faces at the Vera

Many moons ago (actually late last summer during a magical, whimsical time called Bumbershoot) an expecting Imaginary Dana, Ed, and I stood inside the EMP Skychurch eagerly anticipating the entrance of local unsigned act Natalie Portman’s Shaved Head. Having already been introduced to their live show earlier in the summer at Capitol Hill Block Party, we dutifully planted our feet and gleefully took in the fringe and spandex spectacle. Dana likened their sound to that of the B-52’s and danced like only a pregnant granola-toting music buff could. Months later, the band still hasn’t lost its charm. The Vera crowd Saturday night was surprisingly young (I think I’m getting too old for my 19-year-old self) and impressively patient (I think I was just too cold) as they stood in the snaking line that encompassed the venue.

Sound Off victors New Faces opened up the stage for the night with bassist Kyle Hove busting his bass string before the end of the first song, prompting guitarist/vox Nico Jahnsenn and drummer Conor Sysk to launch into another song while an adequate replacement was scouted. Seeing their live show, I couldn’t help but feel nostalgic for all the 1990’s bands I never saw live. Their sound incorporates several aspects of several ages of music. New Faces ended their set with a song sounding very much like an homage to the central riff in Hendrix’s "Purple Haze."

Having already opened for acts such as the Shackletons, I’m saying again what I said before: Be ready for these guys, they’re going to be all over the radar. New Faces are already slated to play at Capitol Hill Block Party and Bumbershoot this summer. With an EP out and full-length on the way in June, I foresee a future brighter than neon windbreakers.

Copy, a one-man act based in Portland, took the stage next. With nord keytar in hand, he took the young crowd through threads of well constructed beats and keytar riffs, offering an all around good time. “Man you are awesome!” an ecstatic kid to my right called, cuing a gracious grin from mix mastermind Marius Libman. Well received by the audience, Marius disassembled his gear at 30 minutes end while chatting with enthused fans in the front row.

A then fling told me that he would shield from the “crazy moshers” and held his word, as I repeatedly evaded the arms of several ensuing fist thrusters and dancing kick boxers last summer when we caught Natalie Portman’s Shaved Head- a band we “absolutely could not miss”. A kind sentiment on his part, I definitely felt for the girls being smashed into the DJ’s turntable area (at one point myself), as his macbook nearly crashed off the table along with a load of mixing gear. True story: Natalie Portman’s Shaved Head have a ridiculously bubbly (and possibly repressed?) local fan base.

Favorites from “Beard Lust” to “Sideways Ponytail” were all performed, much to the crowd’s delight. Always a treat to encounter, Natalie Portman’s Shaved Head brought out the dancer in everyone. Claire England performed a lovely (and surprisingly really, really good) rendition of “Say My Name” by Destiny’s Child for the set’s encore. NPSH, like New Faces, competed in 2007’s EMP Soundoff. There’s no denying that the competition served as a bouncy springboard into the public eye. NPSH have already had the honor to open for Brazilian breakout band CSS. I can’t wait to see what’s next for these guys.