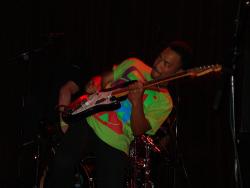 Does It Offend You

Yo Majesty at Neumo's

Tuesday night. Every time I go out on a Tuesday night I think about “Shadrach” by Beastie Boys: “Smokin’ and drinkin’ on a Tuesday night!” I had essentially written this Tuesday night off to catching up on sleep from the weekend but I got an email from Neumo’s with an updated calendar and an offer for free tickets to the Tuesday night show. I responded to the Neumo’s email and within an hour was informed that while I had not won the tickets they were offering me a reduced price. I figured: “what the hell!”

So, I made the walk down to Neumo’s and showed up just as Champagne Champagne had finished their first or second song. This local hip hop set features Pearl Dragon on the mic and Gajamagic (Mark Gajadhar from Blood Brothers) making beats and noise. Dragons rhythms are reminiscent of Del the Funky Homosapian with a even more comical approach given to the lyrics. I couldn’t help but laugh out loud several times during their set (including the time Dragon yelled out “We are NOT Ghetto-Tech!”). They are excitable together, they love being onstage, and more than anything else have a good time, even when the house music came up and Dragon kept on free-stylin’.

Does it Offend You, Yeah? is who I really wanted to see. I’ve been dancing to their music while in my car, getting dressed, or (ok) with my cat (she needs the exercise), and was looking forward to the real thing. They are a four-piece band from the UK who have a great take on electro with just a dash of indie in there for good measure. Tracks like “We Are Rockstars,” “Battle Royale,” and “With a Heavy Heart (I Regret to Inform You)” are as anthemic and hard hitting as club tracks can get but they still rock out during their live show. They really brought it, and I was surrounded by people who genuinely wanted to have a good time and dance. The band even came out to do an encore after finishing up. How many times do you see an opening act come back to the stage? And what did they play? Nothing other than “Whip It” by Devo and it was perfectly suited for the good time these guys put on.

Yo Majesty came out to the stage after a prolonged intro by the DJ and immediately began pummeling the crowd with heavy beats and mind-bogglingly overwhelming rhymes. There was certainly something ominously aggressive to their performance, something I was not entirely prepared for and never quite warmed up to, truth be told. The duo from Tampa are great at what they do but my imminent trip home to the deep South was brought bubbling to the surface by their performance and that’s not necessarily a good thing. Their music is dark, menacing, and indeed threatening; the constant rapid torrent of words and ideas almost never slows during their show, so fast that I could not keep up and was confused as to what they were rapping about. It was like running a gauntlet of metaphors (or reading a Pitchfork record review) that leaves you unsure of what you just heard. For the finale, Pearl Dragon came back up onstage along with a couple ladies acting as back-up vocalists and it was the most unifying moment of the show for me. The crowd thoroughly enjoyed and I can say with much certainty I would have if I was more prepared for their show.