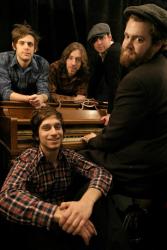 Sometimes I mix things up in my head. I get the Thrills confused with the Kills as well as the Stills (I have also somehow confused Stand By Me with Deliverance — having never seen Deliverance). But this review is about The Stills, the Canadian-born, Brooklyn-bred heartbreakers.

A warning greets us as we enter the Bowery — "Strobe lights will be used in tonight's performance." Strobes, stoke! I am anticipating theatrics — my hunch is further heightened by the appearance of a disco ball and an LCD projector. I expected them to thrill me, kill me —

BUT — I wasn't prepared for Tim Fletcher and Oliver Crowe to be smoking cigarettes as they sauntered onto the stage! I felt somewhat scandalized (indoor smoking is banned in New York City) and then I felt like a total square-and-a-half, remembering that the last time I felt this way was when Cex appeared in his skivvies at the very same venue. I have been reprogrammed: the sight of a lit cigarette elicits the same knee-jerk reaction as a boy in his BVDs!

The cigarette stunt was a dramatic and deliberate beginning to a very stylized show, relatively free of quirks (which are sometimes be the best parts of a performance!), and chock-full of interesting information / observations.

I learned many things:

I love the Stills' debut release, Logic Will Break Your Heart, and both the performance and images projected on the LCD were very faithful to the album's sound and artwork, respectively. Unfortunately, the show was like listening to the CD and watching an animated version of the CD-insert.

The Stills were clearly psyched to play the Bowery, noting that they were just mere "openers" until recently. The show had a part pep-rally and part homecoming feel to it, but at the same time, seemed to be very constructed and restrained. They sounded incredible — each performer's talents and accomplishments were showcased. But the performance itself was largely lacking in the details that make live shows unique. Spontaneous moments occurred rarely, like when Tim asked the "Light Man" to swirl the disco ball over the audience during the BRIDGE/BREAK/CHORUS sections, because, "they [the audience] look so pretty!" or when the non-singing backup boys would silently mouth the words to their favorite songs.

Like the criticisms that befell their brethren Interpol before them, with only one full-length album under the belt and a relatively large following, one is somewhat limited. They played almost every song off their album, and although they've been a band for two years, they're still cultivating the definition of a "Stills Show."