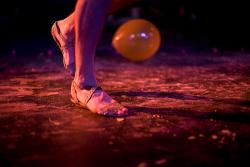 Seriously, what the fuck?

When I had run into a few of my music-writer friends at Of Montreal’s sold out show Wednesday night at the Showbox SoDo, they expressed relief that it was I and not them writing the review of the show. I quickly understood why. Detailing this show-going experience would be atypical from any other review I had previously ever written. All of the show reviews I write try to answer one question: what in the hell happened the other night? After more than two full days later, the question is not “what in the hell happened last night?” but the one I opened this review with: “seriously, what the fuck?”

I had never seen Of Montreal live and only found out around noon that I would be going to this show. I wasn’t the originally-scheduled reviewer for this show and one of the unfortunate realities we rock writers have to deal with meant that I was the Seneca Wallace to my friend Imaginary Shrie’s Matt Hasselbeck. Going in, I only had a vague idea of what to expect. When it was over, I found it was a remarkable experience that I am really grateful to have gotten the opportunity to cover.

Wikipedia says “Of Montreal is an American indie pop band formed in Athens, Georgia.” That’s technically true but also akin to saying “George Walker Bush is an American politician.” There’s so much more beyond one biographical sentence.

Of Montreal came on stage around 10:45 and began their two hour and from that moment, it was a spectacle. Of Montreal had something going on onstage every single second of those two hours. There were often sketches that fit in thematically with the music, sometimes the band interacted or became part of the sketch. I don’t want to explore the metaphorical implications of the characters dressed in animal heads or the ninjas or snipers or when OM frontman Kevin Barnes hanged himself from a noose. I had also counted twelve costume changes from Barnes. Suffice to say, this show was quite a carefully choreographed performance. Late in the set, as my attention was starting to drift, one OM member said that this show was their fantasy and I wrote in my notes that after 90 minutes, it was bordering on masturbatory. It was – but overall, I wouldn’t have it any other way.

The Showbox SoDo is not known for its sound quality or being personal and intimate. It’s like a room that could have a trade shows or swap meets when there’s no taking place. Yet, this night felt electric – like it was transformed into a big cabaret. One good thing about the Showbox SoDo is that sold out shows never feel too packed.

Of Montreal is a glam rock band in the tradition of David Bowie (Ziggy Stardust is the closest approximation of a Bowie phase to Barnes) or Prince. They have been a band for more than a decade now and have been fairly prolific, releasing albums at a rate slightly faster than one album a year since 1997. Their set was mostly songs from Skeletal Lamping, their latest LP, but compiling a setlist was nearly impossible because the tracks on that record defy any real songwriting structure and its final composition seems almost random.

Barnes was an exciting performer on stage, inserting himself into and taking himself out of the skits and often kept singing during his costume changes. Yet, keyboardist Dottie Alexander was who I enjoyed watching the most. When you saw her onstage, she seemed to separate herself from everything that was going on a few feet away, as if to say “these keyboard parts aren’t going to play themselves”. She didn’t seem to play any different characters or have an alter ego. Her surreal detachment was a joy to watch – or maybe it’s just that she’s really cute.

My friend Keenan Dowers asked here a few days ago whether or not bands should be covering Nirvana in their sets because OM closed theirs with a surprisingly faithful rendition of “Smells Like Teen Spirit” – which was preceded by another cover – Franz Ferdinand’s “Take Me Out”. I thought those two songs fit well together thematically. Fifteen years apart, they were two of the most played and most recognizable songs on the radio during their respective runs. I didn’t have the negative reaction to OM playing “Smells Like Teen Spirit” like I often do when bands cover Nirvana songs because I feel like it’s often a lame attempt to get the crowd on your side and just seems like you’re trying too hard. As for Of Montreal and “trying too hard”, well…

Barnes had little interaction with the audience – instead the few acknowledgments came from other band members, whether it was to apologize in advance for the Nirvana cover (“we intend no disrespect”) or to welcome the crowd to their fantasy world. At the end of the night, though, Barnes did wish us a good night. In the one sincere moment of the wild evening, he thanked us for “letting us be ourselves.” 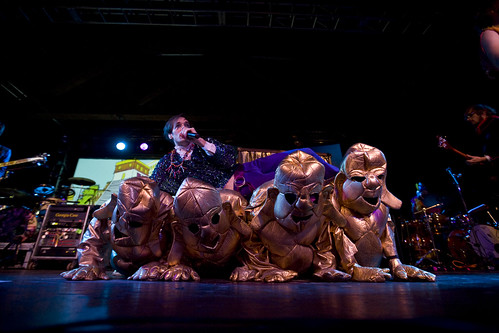 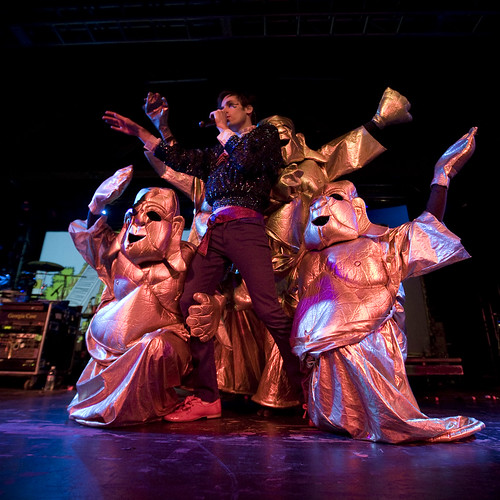 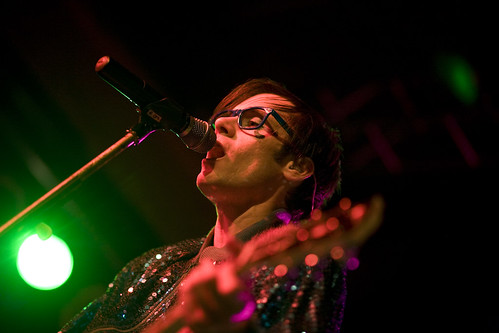