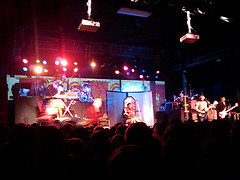 Of Montreal at the Roseland Theatre in Portland

I don't know what you can say about Of Montreal that makes sense and paints a mental picture of what they are. Having never seen them live before last night at the Roseland Theatre in Portland, I wasn't wholly prepared for such a show, though the publicity and word of mouth about their Skeletal Lamping tour sure gave a clue. Kevin bounded on stage with arms open wide, decked out in a Native American costume while a Euripides Greek-costumed crew rolled out a changing screen to center stage. Kevin, in his ever-present scarfed glory, midriff showing, joined the dance party. From a mannequin-posed 80s club scene to dancers in balaclavas andcamo to Kevin' truly fabulous fur bolero jacket, Of Montreal delighted the eyes with purportedly over 30 costume changes. More gay acid-trip inspired rock opera than concert, Of Montreal's performance was a blissed-out sensory overload, soul therapy for the crusty rock kids who forgot how to have a good time.

"Heimdalsgate Like A Promethean Curse" brought down the house with it's cheery jump-up-and-down aesthetic. They're so interminably charming, inventive, and so rehearsed that I felt compelled to just sit back and enjoy the show, my body moving almost involuntarily. Of Montreal is the modern equivalent to the 60s psychedelic pop movement, an insatiable and glittering slice of fun, and an example of what staggering creative ingenuity can create. My eyes darted back and forth, taking in the sequined cowboys performing their routine and the Prince-like performance qualities of the vocally gifted Kevin Barnes. Mimicking slop, a pig started throwing out raw vegetables from a bucket into the crowd as they cried in surprise. Kevin performed almost the entire show in coral sparkly undies or dressed as a centaur, though for his finale he was stripped down and completely covered in shaving cream.

They mainly played songs from Skeletal Lamping, along with some Hissing Fauna gems, and during their four song encore they covered Franz Ferdinand's "Take Me Home" and "Nevermind" by the untouchable (or so some people think) Nirvana. The entire floor was shaking uncontrollably from all the dancing and jumping and I saw sweat flying through the air over the crowd. It was the perfect crowning moment to a marvelous performance. My expectations, which I intentionally kept low, were shattered by what I saw at the Roseland. It was like Jesus Christ Superstar and the Flaming Lips wrapped up in an ecstasy-fueled neon burrito, and it was just as delicious as it sounds.