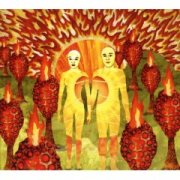 Of Montreal is likely familiar to many readers of this site, having been around (in recorded form) for nigh on a decade. They grew out of the Elephant 6 collective, which is good, in that the Elephant 6 bands carry a certain expectation of quality and have a (smallish) built in fan base, but can be bad, as those bands also seem to have (in spite of their generally high-quality output) a somewhat narrow appeal. I've often figured that was due to the somewhat homogenous vibe of those E6 bands, that is to say, if someone says "Elephant 6," the indie listener immediately conjures images of quirky psychedelia, strange instrumentation, perfect pop melodies and sunny harmonies (where is the bad there, I ask?). All of these things do apply, generally to Of Montreal's The Sunlandic Twins, but where the E6 bands tend to reside more squarely in the tradition of the 60's more "naïve" pop psychedelia, Of Montreal capture a feeling of seventies pop excess with a knowing wink to eighties new wave pop.

The opener, "Requiem for O.M.M.2" feels as though it were pulled straight off a good (I swear there is such a thing) '70s A.M. Gold compilation. "I Was Never Young" immediately follows, sounding like the same band, but produced by Devo. The combination doesn't make sense when you read about it, but it's all in the execution. Clever music often irritates me, but the stellar harmonies and rich instrumentation are too engaging to do anything but enjoy. By the third track, "Wraith Pinned to the Mist and Other Games," an irresistibly bumpin' little electro/disco beat tells me I'm not going to be able to pigeonhole this record, no matter how hard I try. So I'll give up.

One tends not to associate Elephant 6-type bands with dance music, but you can shake yo stuff to this record without having to pretend you're being ironic, and without losing an ounce of indie cred. There's tons of cheesy keyboards, but a dearth of cheesy tunes. The second half of the album gets a little darker, but no less compelling, "Death of a Shade of a Hue" is a particularly strange Bizarro Beach Boys gem, gentle harmonies suddenly turn minor and slightly disturbing. "Oslo in the Summertime" is almost twee goth. I can't even believe it, and I just listened to it. Twice.

The Sunlandic Twins is the finest example of sunny- psychedelic- electro- disco- glam- twee- goth- orchestral- jangle- pop I've ever heard. In fact, I daresay it's the only example of sunny-psychedelic… oh, screw it. It's a great record. Buy it and you'll smile for a week.