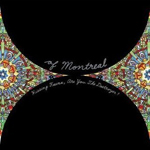 Hissing Fauna, Are You the Destroyer?

There's a great scene on The Simpsons set in the not-too-distant future where Homer and Marge are lying in bed watching TV and Marge turns to Homer to say "You know, FOX turned into a softcore porn channel so gradually, I didn't even notice." That's exactly the sentiment I feel towards the new Of Montreal: they so gradually became a synthpop band from their lo-fi indie roots I hardly noticed. There seems to be an intellectual disconnect that belongs between songs that sound like the lost children of New Order and Of Montreal, but Hissing Fauna, Are You the Destroyer? turns out to be one of the most captivating and satisfying Of Montreal albums in a long time.

In a sense, Of Montreal seem to be following the likes of the Flaming Lips, Ween, and the Earlies into psychedelic synth rock. Many of the songs on Hissing Fauna… are dominated by a sort of post-Beatles, 70's rock vibe that is punctuated by blasts of funk, electronic, and rock. As odd as that mix appears, many times it works remarkably well, like on "Fabrege Falls for Shuggie," a song that sounds like Prince meets the Postal Service (if that makes any sense) and really captures the album in a nutshell. The beat is remarkably funky for skinny white boys from Athens, and to hear Kevin Barnes sing "Be careful how you touch me/my body is an earthquake" is like the indie rock version of "SexyBack." This vibe continues on "Bunny Ain't No Kind of Rider" where Barnes croons, "I need a lover with soul power" on top of a hybridized Beatles dance beat.

On a number of tracks, Of Montreal are channeling mid-80's New Order, right down to the driving Peter Hook-style guitar line and Barnes doing an eerily appropriate Bernard Sumner impression. The prime examples might be the opener, "We were Born Again the Mutants Again with Leafling" and "The Past is a Grotesque Animal" (all 11:53 of the song). At times, you wonder why Of Montreal hasn't tried this sound the whole time, like on "A Sentence of Sorts in Konsvinger," a song that is disturbing catchy in the same vein as the melancholy pop gems of the Future Bible Heroes.

There are a few turns that feel more like "classic" Of Montreal, like the bizarrely titled "Heimdalsgate Like a Promethean Curse," a fairly simple pop song that has some short sojourns into almost "Mr. Roboto" synth-rock opera sound (makes perfect sense, right?) There is a little bit of light filler on the disc to stretch it larger than it should have been and tracks like "Labyrinthian Pomp" and "Suffer for Fashion" might take the new sound just a little bit too far, sounding like a parody of the funk and theatrical (respectively) sound they intend to emulate.

If there is one thing that can be said for Hissing Fauna, Are You the Destroyer?, it's that Of Montreal aren't afraid to go a little nutty and try something out there. I suppose this experimentation and evolution might be hard to value if you are new to the Of Montreal fold when you don't have a lo-fi waypoint like "Tim, I Wish You Were Born a Girl" to compare the synthpop that abounds on this album. However, such a background knowledge of the band might not even be necessary just to appreciate the energy that exudes from this disc, making it a perfect way to get out of the midwinter blues.